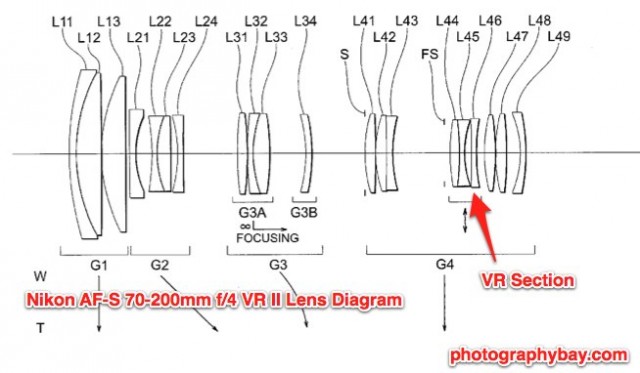 A lens missing from Nikon’s lineup recently appeared in a published patent application at the USPTO.  Canon’s 70-200mm f/4L and 70-200mm f/4L IS lenses have been popular lenses over the past few years.  The original f/4L was so popular that Canon decided to make an IS version and keep both lenses in the lineup.

Now, it looks like Nikon will be jumping on this popular lens size…

Nikon filed a patent application for a 70-200mm f/4 lens back in March 2011 with the USPTO.  The application was published in the USPTO database this week.

Of course, we won’t know anything for sure until Nikon officially announces such a lens, but I would wager pricing to be in the $1300-$1500 range for something like this.  While still a hefty price tag, this would definitely be a “pro” lens and it’s quite a bit cheaper than the current AF-S 70-200mm f/2.8 VR II lens.

For those who are looking for some light weekend reading, I’m providing the full patent application for download (right-click and choose “Save file as…”): Nikon AF-S 70-200mm f/4 VR II Lens Patent.

What do you Nikon shooters out there think about such lens?  What kind of price would drive you to pick up one of these?