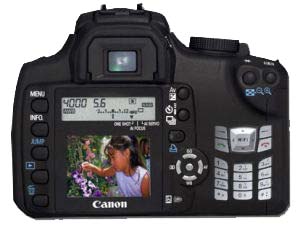 Camera companies usually take all of their developed technologies and spread them across any products that they put out. That being said, one can only wonder how far off we are from a Touchscreen DSLR of some sort with built-in WiFi and social-networking/sharing features.

Scrolling through pictures if needed would quite possibly be done the way it currently is on an iPhone or T-Mobile G1: by swiping and viewing them all in a gallery of some sort. If you wanted to mass delete only specific photos you may have a problem of some sort. In this case I cannot figure out any practical way to do this, but that doesn’t mean that camera companies haven’t either.

Of course, this would require an excellent battery that can power that LCD (perhaps OLED or AMOLED) and also would be able to keep the shutter mechanism going when your firing away.

Many of the functions that require buttons may be able to be changed very easily through the touchscreen. Things like flash compensation, white balance, color settings, drive mode, etc. might benefit the camera user by getting rid of all these buttons. However, there is also the counter-argument: many pros like these buttons because they allow for quick access to their favorite settings. A touchscreen DSLR will mean scrolling through menus to find what they need. Perhaps the only buttons that are the camera might be programmable by the user to quickly access these favorite settings.

Things like shutter-speed and aperture would still need to be controlled by the wheel-dials. These two settings are what make your picture and messing with the way these work would greatly hinder the way a photographer works to a point where adapting will require a totally different learning curve.

Apple has something called tap-to-focus in their new iPhone 3GS. Focusing like this could prove very unreliable and so this is something that should remain inside of the lens. Manual focus fan-boys (such as myself) would demand an excellent system for low-light auto-focusing. In contrast, wildlife shooters may love a tap-to-focus technology. For example, if one was photographing moving birds, perhaps they could switch to Live View, tap on the exact point where they would like to focus, and that focus point would constantly stay in focus in order to better track moving targets and without the need to hold down the shutter button in order to auto-focus first. That way the photographer would be able to focus on anything else that they need to in order to get the shot.

In addition to the touchscreen technology we would love something like the technology built into a point-and-shoot camera like the Sony G3. The camera allows you to connect to WiFi hotspots and upload your images and video to a sharing website. This would need to be much better and of much more use to the photographer than a simple Eye-Fi card. Of course, we are talking about DSLRs here so much more information will be sent to the internet as compared to this little digicam. This once again calls for greater battery life as the AVCHD video from something like a Canon 5D MK II is much larger in file size than something like a Canon HF S10.

Also keep in mind that photographers need to compete with the like of ordinary folks these days. For example, the most iconic images that we were taken when a plane crashed into the Hudson River here in NYC were from an iPhone. The user simply posted them to his Twitter account. He most likely did not use a WiFi signal to do such a thing. To that end, this DSLR may also call for the need of 3G/2G and Bluetooth connectivity.

The more I go on, the more and more this begins to sound like we are putting a phone/compact camera into a DSLR. On the contrary, some compacts are taking technology from DSLRs and incorporating them.

What would you want out of a touchscreen DSLR?

Do you think it would be worth it: if not for pros then maybe the prosumer/consumer market?