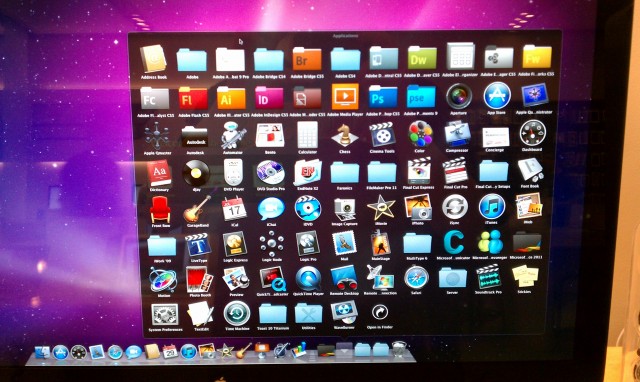 It turns out though, that there are a number of professional Adobe software applications that are entirely absent from the Apple Store – either as demos on the display Macs or as boxed software available for purchase. 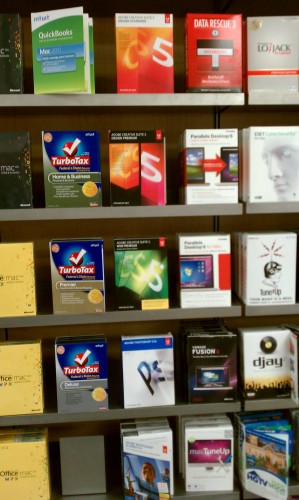 I wouldn’t have given it much thought; however, there are a number of non-competitive, professional Adobe applications available for demo and purchase in the Apple Store.  There are several different options available in the design realm; however, there were no video editing programs from other publishers that might compete with Final Cut Pro.  In fact, even consumer programs like Adobe Premiere Elements, which competes with iMovie, were nowhere to be found.

Same thing is true with photography applications.  Plenty of Photoshop options, which aren’t really competitive to Apple’s Aperture and iPhoto apps – but no Lightroom, which is probably the most popular pro-photography application available . . . on PC or Mac.  Lightroom, of course, is a direct competitor to Aperture – and is regarded by most (but not all, so hold the hate mail) as a superior RAW image processing application.

On Apple’s website, I managed to find After Effects available, but that was it – no Premiere Pro, Soundbooth, Audition (available for Mac in CS 5.5), Premiere Elements, or Lightroom.  The only Adobe bundles that are available (either online or in the physical store) are Design Standard, Design Premium and Web Premium.  Adobe Production Premium, which includes photo and video editing apps as the core of the bundle appears to be completely unavailable through Apple.

So, yeah, Apple is cherry-picking which Adobe products to sell to its customers and is making sure that it keeps a competitive edge over Adobe on its own turf.  Is it a big deal?  Not so much as bundling might be, but it still has a bit of a stink to it.  Apple can do whatever it wants, and I’m probably not going to stop buying Apple computers anytime soon; however, it would be nice to let customers compare competing products if you really believe your stuff is superior.

Of course, this wouldn’t be the first time that Apple has blackballed Abode, would it?