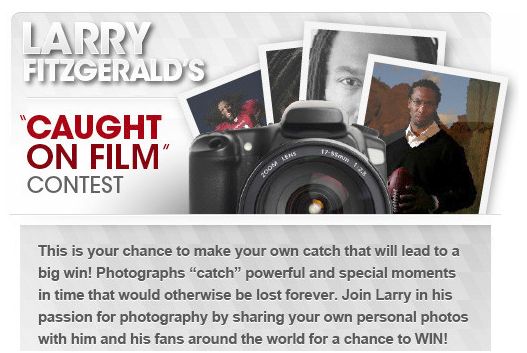 Turns out Arizona Cardinals Wide Receiver Larry Fitzgerald is quite the photography enthusiast.  He got deeper into photography when his point and shoot camera didn’t do the scene justice when visiting the Roman Colosseum.

Since then, he’s become a “Canon guy” and carries a Canon G12 everywhere.  When he wants to step things up, he shoots with Canon DSLRs and lenses (is that a 60D?).  Here’s what Fitzgerald says about his passion for photography:

“It’s an awesome way to capture the moment,” Fitzgerald said. “The only time that has happened is that time, during that lighting. … Eventually when you look back at that picture, it tells a story — and one only you can tell.” –ESPN

You can check out some of Fitzgerald’s photos from his recent Africa trip on his Facebook page, along with the rest of his albums.

Additionally, Fitzgerald has a “Caught on Film” photo contest where anyone can enter their best shot for a chance to win an autographed Larry Fitzgerald jersey.  You can check it out, enter and vote on Larry Fitzgerald’s website.