What you need to know up front is that the Sony NEX-5N is not a perfect camera.  It’s a solid (bordering on excellent) offering from Sony; however, it has some niggling problems and concerns that take some of the luster off of it.  (Update 11/9/11:  The core defect appears to have been fixed. See details below.)

The NEX-5N offers the same APS-C sized sensor as found in DSLRs like the Nikon D7000 and Canon 60D.  As a result, it is somewhat of a competitor to these larger (and some would say, ‘more serious’) cameras.  However, the Sony NEX-5N also competes head-to-head with the large offering of mirrorless cameras in the Micro Four Thirds lineup, as well as other interchangeable lens models from Samsung and Nikon.

With what we’ve seen over the past couple of years, the current battle in the mirrorless camera market pits the Sony NEX line with the Micro Four Thirds cameras from Olympus and Panasonic.  I don’t know the specific numbers, but these three manufacturers have to make up the vast majority of mirrorless cameras sold.

That big APS-C sensor is the real beauty of cameras like the NEX-5N and I admire Sony for sticking with quality even though it means the lenses are larger (in some cases significantly so) than the Micro Four Thirds and the much smaller formats from Nikon and Pentax.  That said, I’m quite uncertain who will dominate the mirrorless market a few years down the road. 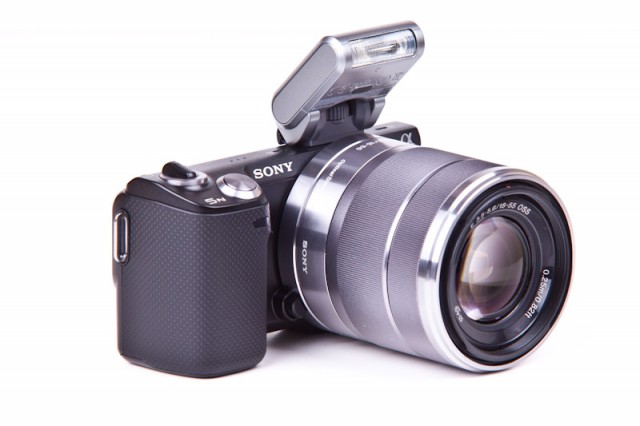 The 18-55mm kit lens is quite the beast of a lens for the otherwise ultra-compact NEX-5N.  Stick a pancake prime on the end of the NEX-5N and it gets a lot smaller; however, many consumers don’t quite appreciate the simplicity and quality of a prime lens over the convenience of a zoom lens.

From a user-friendliness standpoint, the NEX-5N is certainly oriented more toward the consumer.  There are few external controls, which makes the camera very “simple” to operate on a shot to shot basis.  Unfortunately, this design quickly becomes the bane of more experienced photographers.  Having to manipulate on-screen menus in order to change the camera’s shooting mode is not what most photography enthusiasts wish to endure. 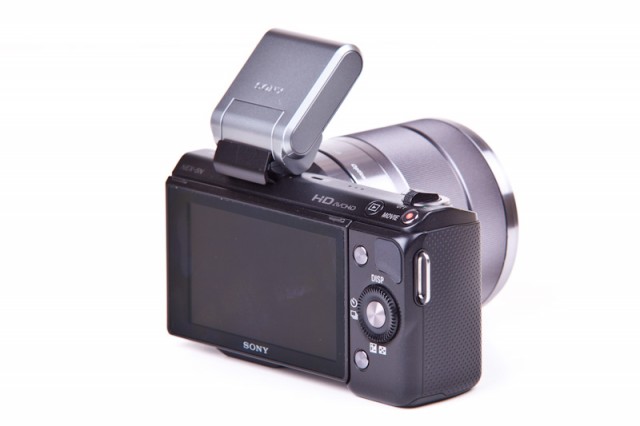 Having spent quite a bit of time with the NEX-5N around my neck, the control system grows on you after a while and you can make some customizations of buttons on the back of the camera to gain quicker access to things like ISO and white balance settings.

Like its predecessor, Sony found it appropriate to exclude a built-in flash on the NEX-5N.  It seems like a rather odd choice on such a consumer-focused camera.  While I’m sure it keeps the overall camera body size down, the size of the lenses that attach to the camera make the trimmed fat from excluding the flash irrelevant. 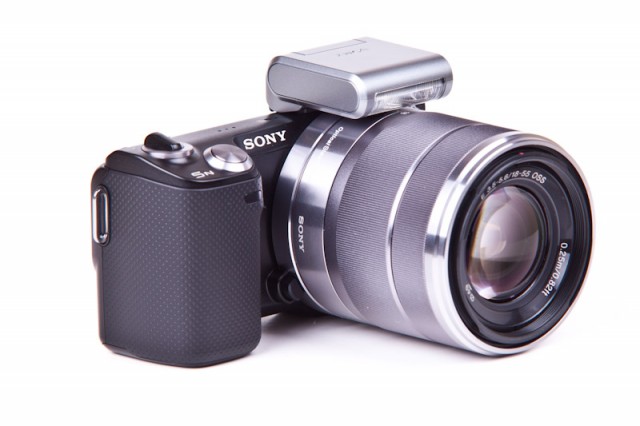 The good thing, however, is that Sony includes a screw on flash that attaches to a proprietary receptacle on top of the camera.  The flash folds flat over the camera body and lens when not in use, protruding about 1/2-inch from the camera.  When tilted up, the NEX-5N recognizes this and makes several flash controls available in various parts of the menu system.  There are only two positions though – up/on and down/off.

Due to the minimal size of the NEX-5N flash, I found it more convenient to simply leave the flash attached at all times regardless of whether I had plans to use it.  It’s also a pain to screw into the receptacle . . . so, another reason to leave it attached. 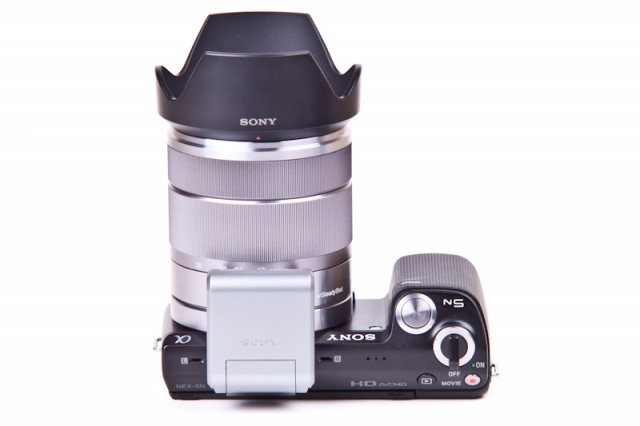 The raised grip on the NEX-5N gives your right hand some meat to hold onto while framing up shots.  The shutter release is well-positioned for your trigger finger to rest as you snap your frames.  I appreciate the inclusion of separate shutter and movie record buttons.  Frankly, this should be a standard feature on every camera that captures both stills and movies.  Unfortunately, not all manufacturers have caught on yet.

Actually shooting with the NEX-5N was a pleasure.  The camera is fast and accurate across the board.  I was instantly pleased with autofocus, metering and shutter response performance of the camera.

When it came to actually taking photos with the NEX-5N, it didn’t feel like it was really lagging much behind a DSLR.  Sony really has nailed the contrast AF acquisition and shot-to-shot times on this camera.  These latest mirrorless cameras like the NEX-5N and Olympus E-P3 no longer feel handicapped when compared to their DSLR competitors.

The Sony NEX-5N competes directly with other APS-C cameras, including DSLRs, when you start looking at the images themselves.  The NEX-5N houses what is likely the same or very similar image sensor as found in the Nikon D7000.

The RAW image files give you the same editing control over the post-production process when using a program like Adobe Lightroom or Apple Aperture.

The Sony NEX-5N image quality excels in low light, particularly if you take advantage of shooting in RAW format.  Snapshots and vacation photos are easily printable at ISO 3200 and below at 4 x 6 sizes – and, frankly, could probably be pushed beyond that for all but the most discerning family album makers.  The NEX-5N simply delivers where it counts on image quality.

As a result of the democratization of image quality between the NEX-5N and other proper DSLRs, it becomes less about the image quality of the sensor and more about the user experience.  As it should be though…

There is a vast difference in using a DSLR with multiple individual focus points driven by a phase difference AF detection method, which can be finely tuned for sports photography or any fast-paced photography environment.  The user experience is much more casual with the NEX-5N.  I think this fits the camera’s intended user quite well though. 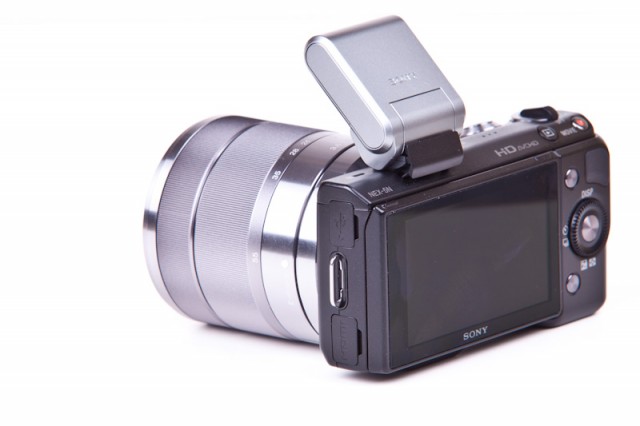 I was really excited about the video capture features on the NEX-5N and, for the most part, it delivered the goods.  The NEX-5N offers several different frame rates, including 24p and a new 60p option as part of the new AVCHD 2.0 codec.

The older AVCHD codec offered 60i capture, which delivered only 30p at the sensor level and when pulled into your editor of choice.  The new 60p is a true 59.94 frames per second capture rate, which is great for conforming into a 24p timeline for smooth slow motion effects.

Here’s a quick sample of 60p footage conformed to 24p.

For more info on how to conform footage for this slow motion effect, see this prior article.

I don’t think that there’s a cheaper solution out there right now for getting 1080/60p footage on an APS-C format sensor.  For this reason alone, I think Sony wins big with video capture on the NEX-5N.

Now lets talk about the downside of the video capture on the NEX-5N.  As with all other HDSLR and mirrorless cameras out there, the on-board audio capture is less than ideal.  That’s not a big deal; however, the NEX-5N makes it worse because it ships with an unfortunate defect that causes a “clicking” noise when recording video.

Check out the short video clip below for a representation of the audio clicking defect.

While Sony has issued a performance improvement notice that allows NEX-5N owners to return their camera for servicing, Sony does not go so far to say that this fixes the defect.  Sony also attempts to diminish the problem by attributing the clicking sound to “sudden motion while recording; motion generally inconsistent with smooth video recording.”  In my experience, this “sudden motion” statement is inaccurate.  Normal handheld video capture with the NEX-5N generates enough motion to cause the clicking sound.

As a result of this defect in the camera, I have to limit my exuberance for the otherwise solid video features.  If you are using the camera in a more pro-setup with dual system for video and audio capture, the clicking problem won’t be a problem since you can still use the in-camera audio as reference for later syncing.  However, if you are buying the NEX-5N, as an all-in-one solution for consumer/casual/vacation video capture, this could be a real problem.  My advice would be to keep checking with Sony and stay tuned to Photography Bay for updates on a proper confirmed fix for this issue.

(UPDATE 11/9/11: I have heard from several Sony NEX-5N owners that the “performance improvement” offered by Sony for the NEX-5N’s clicking defect during video capture has been resolved. I recently confirmed this for myself with several NEX-5N models that had the fix applied. In all cases, the clicking was not audible to me anymore.  As a result, this drastically affects my opinion of this camera’s performance and now seems to be the mirrorless camera to beat.) 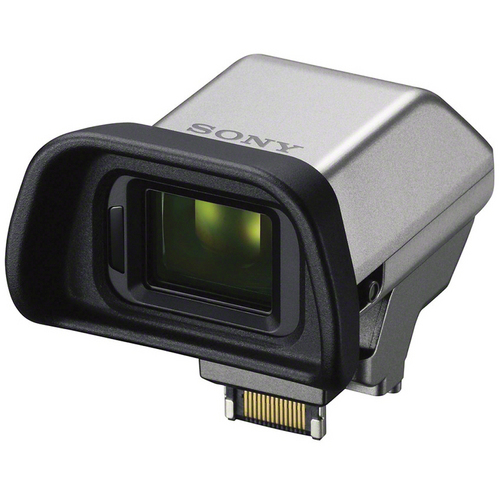 Sony NP-FW50 Battery -The NEX-5N comes with one of these rechargeable li-ion batteries; however, if you are going to be shooting a lot between battery charging opportunities, you can pick up a spare.

Sony 16mm f/2.8 E-Mount Lens – This lens is an ultra-compact prime lens that really helps shrink the overall package on the NEX-5N.  It provides a full frame equivalent of a 24mm lens – a great wide angle option.

Sony 50mm f/1.8 E-Mount Lens – Due out in December 2011, this lens is designed to work with the NEX-5N and is situated to be a perfect fit as a portrait lens for the camera.

Sony OLED Electronic Viewfinder – If you prefer to put your eye to a viewfinder instead of relying on a live view display, Sony has this EVF, which offers a 2,359K dot resolution via an OLED display.

Memory card reader – If you don’t own a memory card reader, they make transferring images to your computer a world faster. I highly recommend picking one up with the NEX-5N. They’re cheap and big time saver. Kingston makes a good card reader for about $12.

The Sony NEX-5N is an solid performer top-to-bottom in spite of the audio defect during video capture.  If you are looking for primarily a still camera, the NEX-5N is an excellent choice.  As noted above though, if you are looking at the NEX-5N as a video capture tool as well, then you have some thinking to do.  If there was no audio capture defect, I would have no trouble giving the NEX-5N my highest recommendation for casual and enthusiast photographers.

Once you become accustomed to the control scheme, the NEX-5N is fast, accurate and delivers solid images.  The inclusion of a 1080/60p video capture is a huge bonus for those interested in overcranked footage for their 24p sequences.  All-in-all, the NEX-5N is a great camera that is marred by an unfortunate problem with its audio recording capabilities.

(UPDATED 11/9/11:  Based on the fix for the audio clicking sound during video capture noted in the body of the review above, I am withdrawing my reservations about this camera and now give the Sony NEX-5N my highest recommendation.  Moreover, I would have trouble picking any other current mirrorless camera over the NEX-5N.  It’s unfortunate that the NEX-5N made it to market with the defect in the first place.)