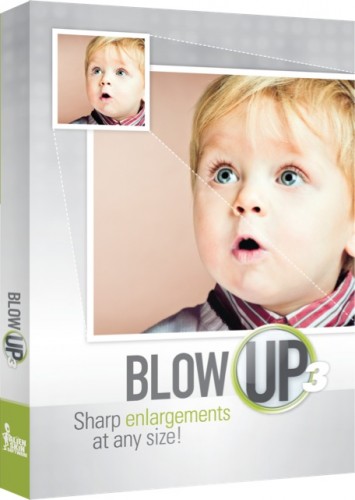 Alien Skin has unveiled Blow Up 3, an image enlarging tool. (You can see my review of Blow Up 2 here.)  Blow Up 3 includes a simper interface and Lightroom integration.

Alien Skin describes the difference in the above images as follows:

We enlarged a portrait by 300% in each dimension.  As you can see, the traditional bicubic technique on the right looks blurry and has stairstep artifacts.  Bicubic is the resizing algorithm used by Photoshop and most image editors.  On the left is the same image enlarged with Blow Up 3.  Notice that eyelashes are still thin, smooth, and sharp.

Raleigh, North Carolina– Alien Skin Software today announced Blow Up® 3, the new version of its photo enlargement plug-in for Adobe® Photoshop®, Photoshop Elements, and Photoshop Lightroom®. Blow Up enlarges photos while keeping them crystal clear, even at huge sizes. With a new simple user interface and support for Lightroom, Blow Up is easy to use in any workflow.

“Our best achievement in Blow Up 3 is image sharpness,” said Terence Tay, the designer of Blow Up. “Even huge prints don’t have any traditional computery artifacts.”

Anyone who has enlarged a photo with traditional software has experienced the disappointment of blurry details and jagged edges. Blow Up 3 keeps edges sharp and smooth, even more so than in version 2. Especially in large prints hung on a wall, the difference between Blow Up and Photoshop is astounding. Blow Up does output sharpening depending on your paper type to make sure prints are crystal clear.

Blow Up is now simpler to use. If you understand Photoshop’s resize command then you already know how to use Blow Up. Blow Up is even easier because it comes with presets for standard paper sizes.

Blow Up now works in Lightroom, which is where many pro photographers spend their time. Those pros will also enjoy Blow Up’s new faster speed when they are enlarging batches of photos.

Blow Up 3 will be available in November 2011 through www.alienskin.com for $199 USD. That is a price drop of $50 from version 2. Owners of Blow Up 1 or 2 may upgrade for $99 USD. Free upgrades will be automatically sent to everyone who purchased Blow Up 2 directly from Alien Skin Software in July 2011 or later.

Blow Up 3 is a plug-in and requires one of the following host applications:

An Intel Core 2 processor or compatible is required.

A monitor with 1024×768 resolution or greater is required.