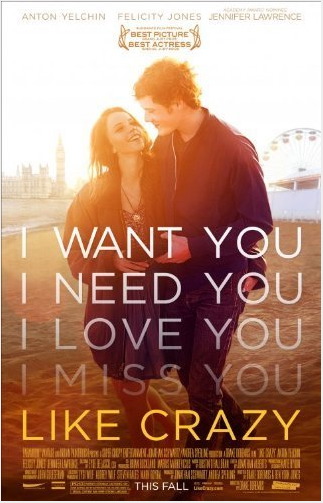 A couple of months ago, I mentioned the film ‘Like Crazy’ was shot on a Canon 7D and scheduled for release on October 28.  It was initially released in 4 theaters, and now is up to 16 in its limited release.

The critics seem to be generally happy with the film. Screenrant says that it is “one of the best modern day love stories to come along in the last few years.”  The film has done well in its limited release, maintaining well above the significant $10,000 per theater mark.  To date, it has grossed over $500,000 in the limited domestic release.

Of course, it doesn’t matter what this film was shot on.  It’s the way the story is told, and the 7D is simply a storytelling tool for the film.  Perhaps the only significance of the Canon 7D in this story is the fact that it adds a rather small dent in the budget, yet is capable of delivering results similar to prohibitively expensive cameras.  That, and it’s a camera any of us can buy with a couple of clicks of the mouse or walk into a number of big box retailers and walk out with.

While there are many other aspects of the production of a feature film, the camera is no longer out of reach.  We continue to see this from blockbuster films like Iron Man 2 and Captain America to indie features like Act of Valor and Like Crazy.