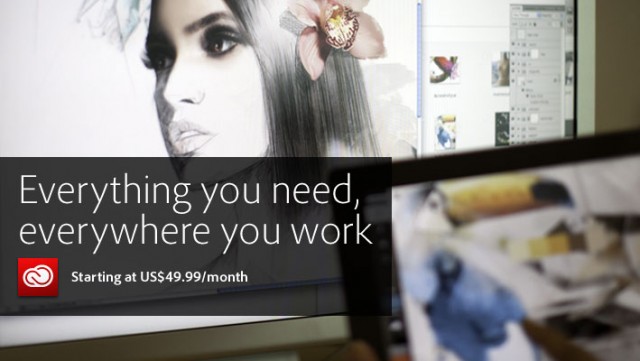 Adobe is about to shake things up a bit with a new subscription model for its Creative Suite applications.  Adobe has kinda soured the milk recently with its decision to cut upgrades for earlier versions of its software (which it later rescinded for this upgrade cycle), so I’m curious to see how all of this shakes out. 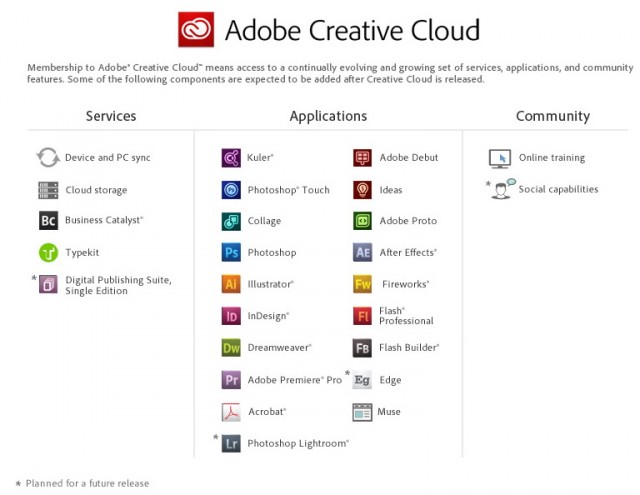 Adobe Creative Cloud is a new subscription offering from Adobe. When it becomes available in the first half of 2012, it will give members access to a creative hub where they can explore, create, publish, and share their work using Adobe Creative Suite® desktop applications, Adobe Touch Apps, and Adobe services together for a complete ideation-to-publishing experience. Adobe Creative Cloud will be everything you need, everywhere you work — starting at US$49.99 per month.

What Adobe appears to be offering is the ability to have all of the Creative Suite apps at your disposal for $50 per month (when you sign up for at least a one-year commitment).  Doing the math, that’s $600 per year.  That’s $50 more than an upgrade to the latest version of Creative Suite Master Collection. (Note this $49.99 price that appears to be for access to all the Creative Suite apps is substantially different from the prices Adobe quoted last year when the subscription model was first teased.)

Economically, that’s not necessarily a bad deal if you are a Master Collection user.  I’m not sure how/if Adobe will break down the subscription model for individual apps, so I’m not going to speculate too much on that.

Along with access to the Master Collection apps, Adobe is adding more apps and features to the subscription model, including Lightroom (which should have always been part of Production Premium, at least).  Additionally, there’s quite a bit of online/cloud functionality that looks like it will be set to go from the launch and will no doubt expand going forward.  20GB of cloud storage will be included with the subscription.

One thing that I think is very promising should the subscription model catch on is the ability for Adobe and users to no longer be tied to such a rigid upgrade schedule.  How about just launching something when it’s ready?

The way things have gone with Adobe CS products is that they receive major updates when the product cycle update schedule says it’s time. If a subscription model works, then After Effects could get a major update when Adobe has something ready to send out, instead of waiting for Photoshop and every other CS app to hit the Spring upgrade cycle (or vice versa).

Right now, the annual upgrade and standard retail pricing seems to be sticking around.  Until I know more about the details of what’s available how the access will work, I’m a little on the fence about what I’ll actually do when CS6 comes out.  However, I’m not as opposed to the deal as I was last year.

We should know a lot more details when Adobe CS6 products are announced in the next couple of months.

What are your thoughts about a subscription model to one or more Adobe applications?  What’s the right price for you to pay on a subscription basis for Photoshop and/or other Adobe apps?