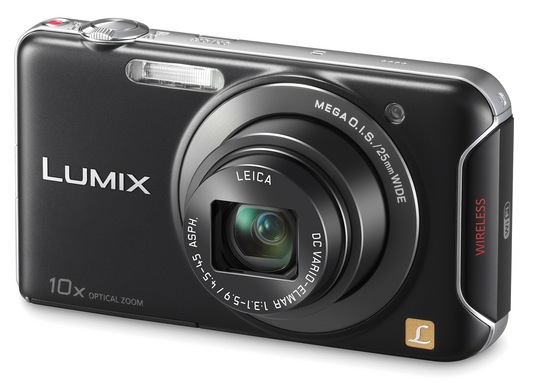 The Panasonic Lumix SZ5 is a compact camera with a 10x optical zoom (25-250mm equivalent) and 14.1MP CCD image sensor.  It is Wi-Fi enabled and allows you to connect the camera directly to your smartphone to share photos online.

The Panasonic Lumix SZ5 retails for $199 and is available in white or black. 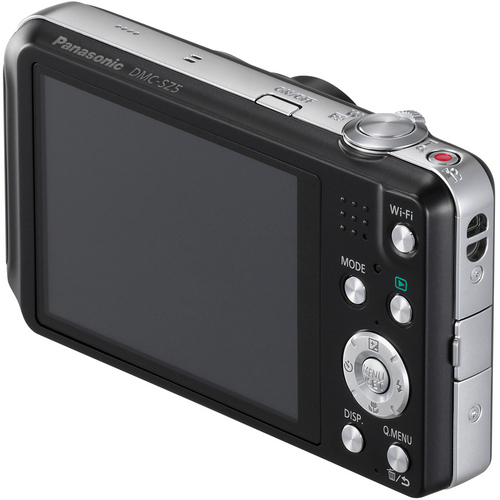 More details on the Lumix SZ5 in the full press release below.

“With the rise of social media and file sharing, consumers have become accustomed to capturing spur-of-the-moment photo opportunities on their smartphone device.  But, smartphones do not offer the same image quality and offer less creative control than a traditional digital camera, leaving consumers torn between capturing quick-sharing photos or capturing truly stunning photographic imagery ,” said Marc Sorkin, Senior Product Manager, Imaging, Panasonic Consumer Marketing Company of North America.  “Panasonic has created the LUMIX SZ5 to fill the gap between smartphone devices and traditional digital cameras.  This new camera model fulfills the needs of consumers who are looking for high-quality photos that can be uploaded easily onto their social networking sites and shared with friends quickly and seamlessly.”

The LUMIX SZ5 integrates Wi-Fi connectivity so that users can enjoy flexible shooting style and instant imaging sharing.  The LUMIX SZ5 can be connected directly to a smartphone device by using it as a wireless router, which eliminates the need to search for a Wi-Fi hotspot.  With the LUMIX LINK application, for iOS/Android smartphone devices, users can utilize remote shooting, which allows them to place the LUMIX SZ5 at a shooting position and monitor what the lens is seeing live from their smartphone device at 30 fps (frames per second).  Users also have the ability to zoom, set focus position, shoot and playback images directly from their smartphone screen using the app.  Additionally, users can tag location information to images by utilizing the GPS (Global Positioning System) log of a smartphone.

The LUMIX SZ5 records dynamic HD video in 1280×720 at 30p in MP4*1 format which can be played back directly on a PC or other portable electronics device without the need to convert the file.  A dedicated video button allows users to quickly switch between photo mode and video recording.

To help ensure the LUMIX SZ5 is easy to use, the digital camera features Panasonic’s popular iA (Intelligent Auto) mode. In iA mode, a suite of technologies are automatically engaged and the camera chooses the best setting based on the shooting environment. For instance, iA includes Face Detection, AF Tracking, Intelligent ISO Control, Intelligent Scene Selector and Intelligent Exposure.  MEGA O.I.S. (Optical Image Stabilizer) helps to suppress handshake which often occurs when shooting using high zoom.  Furthermore, the Auto Retouch function automatically adjusts the contrast and brightness to give any photo a different impression with the touch of a button.

The LUMIX SZ5 also features special effects to enhance the shooting experience and create fun photo options.  In Miniature Effect mode, the peripherals are defocused while saturation and contrast is emphasized to make the picture look like a diorama. Video recorded in Miniature Effect mode is played back in 10x fast-forwarding, making it comical and fun to watch*2. Panorama Shot makes it possible to shoot a horizontal or vertical panoramic image by taking consecutive shots and then overlaying the photos for the effect of a panoramic photo.

The new LUMIX SZ5 makes archiving images as simple as charging the camera’s battery.  Both photo and video, in their original size, can be archived to registered digital equipment, like a PC or compliant Panasonic AV equipment, automatically via a home’s wireless router when the camera’s battery is being charged, eliminating the need to eject and re-insert the camera’s SD Memory Card or connect the camera to a computer via USB cable.  Users can also save photos to the Panasonic exclusive cloud service, “LUMIX CLUB” and easily transfer images to Facebook™, Flickr™, Picasa™, Twitter™ or YouTube™.  The LUMIX SZ5’s Wi-Fi function also allows for playback of images on DLNA (Digital Living Network Alliance)-compliant VIERA HDTV’s*3.

Additional features of the LUMIX SZ5 include:

Pricing and availability will be announced approximately 30 days prior to shipping.  The LUMIX DMC-SZ5 will be available in black and silver.  For more information about Panasonic LUMIX digital cameras, please visit www.panasonic.com/lumix.

• Use an SD Memory Card with “Class 4” or higher speed when recording videos.

•SD Speed Class is the speed standard regarding continuous writing

*2 Sound will not be recorded with [MINIATURE EFFECT] and approximately 1/10 of the time period is recorded. (If you record for 10 minutes, the resulting motion picture recording will be approximately 1 minute long.)