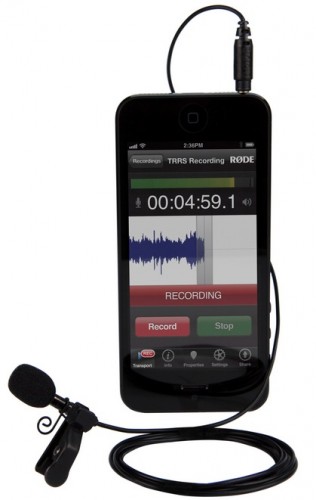 RØDE has unveiled a new lavalier mic for iOS devices. The smartLav is a $60 lav mic that plugs into the headphone jack of the iPhone or other iOS device for close-miking of talent.

The smartLav is designed to be used with the RØDE Rec iOS app, which will allow you to record up to 16-bit/48kHz audio and then edit and publish that audio to a variety of sources. HDSLR shooters can import audio through from their iPhone into iTunes and then pull it into their NLE program for syncing with scratch audio from the camera.

Combined with the recently announced iXY mic, RØDE is making quite the push into the mobile recording market. (Note that you can record up to 24-bit/96kHz in the RØDE Rec iOS app when paired with the RØDE iXY mic.)

The RØDE smartLav should be shipping later this month and should be available at B&H Photo and other RØDE retailers.