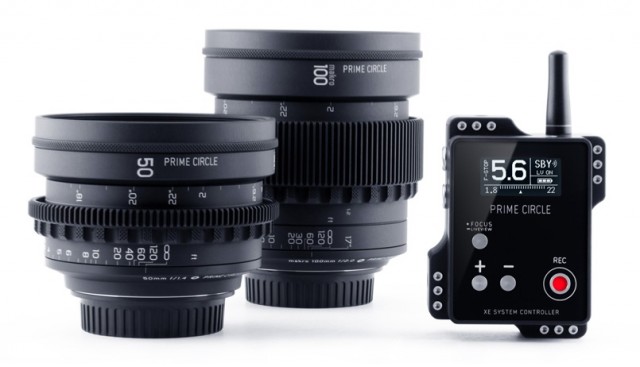 More details in the complete press release below. The Prime Circle XE System is a complete range of innovative prime lenses with electronic aperture and wireless control up to 300 ft, available in 10 different focals from 15mm to 135mm with a makro 50 and makro 100mm.

Large focus scales (cine-style focus classic direction) on both sides of lens barrel for precise focus-pullers work, and 95mm front mount across all the lenses sizes.

The optics offer magic cinematic feeling engineered by the most prestigious optical manufacturer in the world. Based on the popular EF Mount the Prime Circle XE can be mounted on every EF Mount camera, or several different cameras with FZ Mount or micro 4/3 with the XE System intelligent mounts.

Lenses aperture can be controlled wirelessly directly from the d.o.p. chair in front of the control monitor.

Modern EF Mount cameras can control directly the Prime Circle XE lenses aperture, or with the wireless XE Controller it’s possible to control image exposure far away from the camera.

The XE System intelligent mount (adapter) offers the option to reach the same freedom with Sony FZ, Panasonic, Blackmagic or other cameras.

The O-Led display can be checked in total sunlight or in total darkness!