Producer, director and editor Heber Cannon of the CrossFit Media Team was kind enough to give us the rundown on the slow motion shoot with Chad Vaughn. Dig in for the full scoop from Heber below. 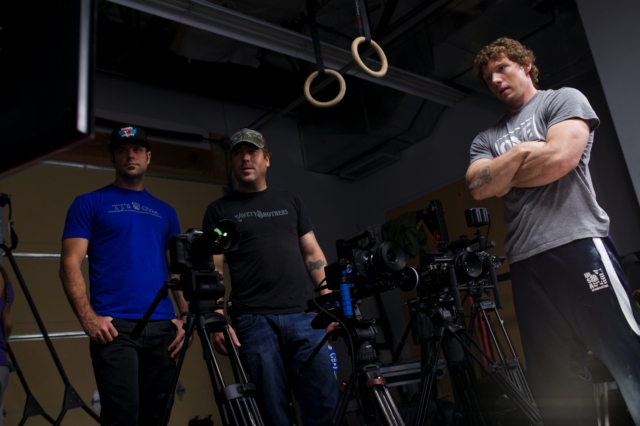 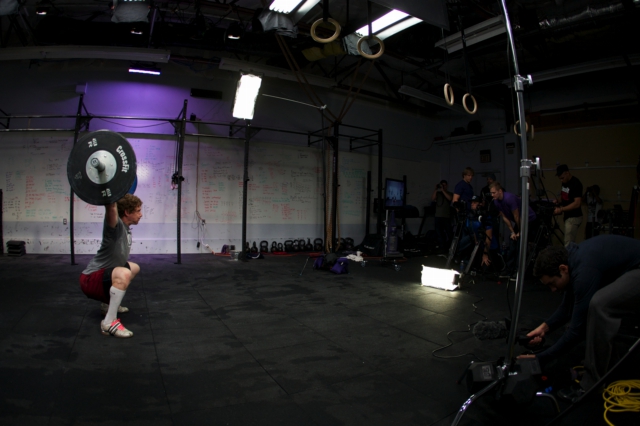 We used all the Kino’s for this shoot, and you can see many of them in the background of the shots of the following video:

The idea for the shoot with Chad was to test the capabilities of Sony’s new FS700 camera. I wanted to test the slow motion on the FS700 and compare it to the Canon C300, 5D, 7D, or an AF100 all shooting at 60FPS and then taking that into a program like twixtor and slowing it down.

You can get incredible results if you light well and keep the background simple with software for a slow motion effect. CrossFit is always looking to test new ways to film movements, exploring new technology, this shoot was a perfect example of that. 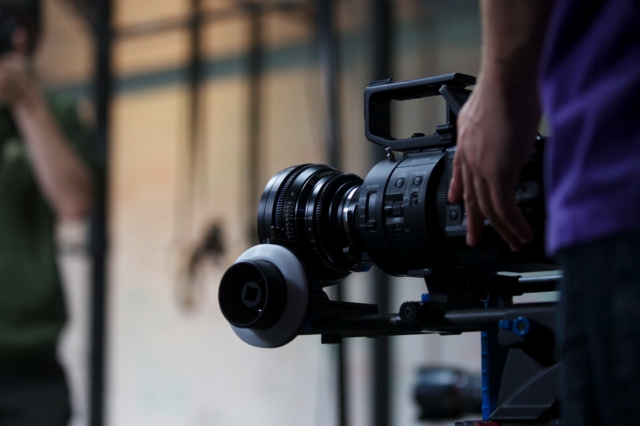 I planned on shooting at 960fps initially, but with the loss in bit-rate and resolution, it looked pretty bad, and we couldn’t get far enough away from Chad to see him head to toe. CrossFit is all about seeing the whole movement, it was important to use to see everything that was going on. 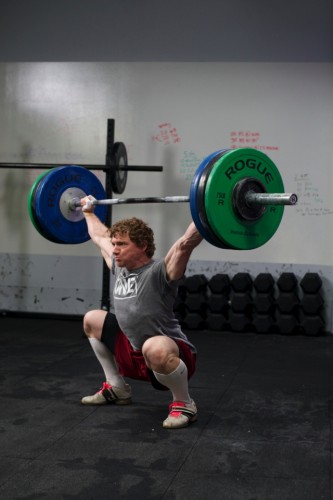 The camera has its limitations, as it will only shoot at an extreme rate for a limited amount of time. At 480fps the shot will only last for 9 seconds real time. When we played back that 9 seconds and saw the results, we were really happy with how the lift looked. The 9 seconds is stretched out for 3 minutes and that’s all we really needed, much slower you’d lose interest. As you can see from the final video, you really get a sense of the little nuances of the lift.

To get a 480FPS we had to have a shutter speed of 1/480. Even with all the lights we had in there we had to bump up the gain and we had some grain in the darker areas of the footage. We cleaned a lot of that up in post production but you still see it when it’s played back on a big screen.

After we shot the clean and jerk and snatch, we did some other shots and brought in an extra light, an Altman 650 tungsten fresnel and put a daylight gel over it, to match the other lights. This proved to be what we needed to get a cleaner shot without having to bump up the db’s in the gain on the camera. 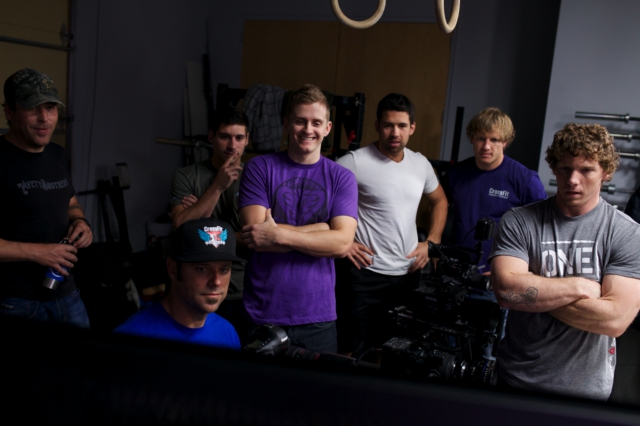 We brought Chad out for two days of shooting. After each shot, the camera would play back the footage as it captured the burst. This allowed Chad and I to watch the footage in slow motion to critique the lift until we found a shot we were happy with. The way an elite Olympic lifter moves is really incredible, much like a ballet dancer, there is precision in the movement. Chad was super willing to keep lifting until we got something that displayed that. We spent about 60-90 minutes on each lift and took a break to film some coaching tips in between.

We had an awesome crew of 9 people. Most of whom are all professional and creative individuals who work with CrossFit in producing video and photo content. CrossFit tends to attract top notch people with hard work ethic. I may be getting redundant, but CrossFit and it’s employees are really cool. 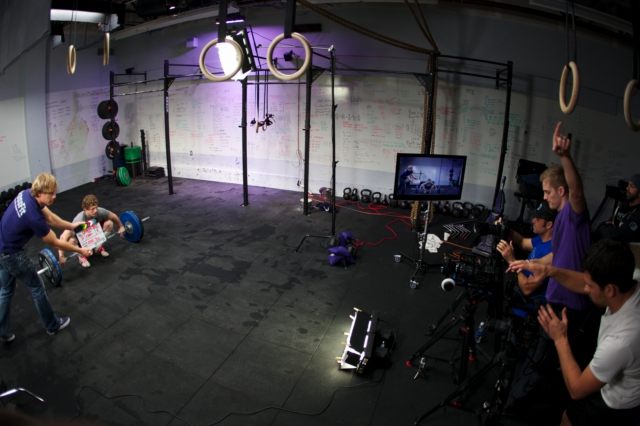 For the clean and jerk the 9 second time limit became a problem. The heavier the barbell got, the slower he was in the pause before the jerk. I really wanted to see the barbell go from the bottom to overhead and the drop as well, so after hitting a weight he called his “one rep max that day”, we scaled back to 315 to capture it all in the time frame the camera gave us. 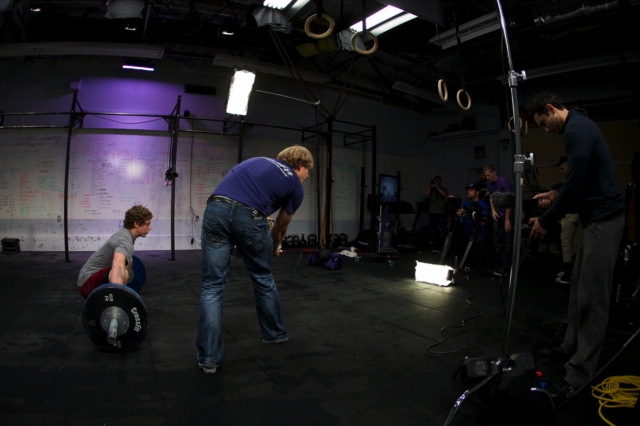 For set up shots, the FS700 is a fantastic camera for slow motion. However, you feel the limitation when you try to capture slow motion during actual workouts. You have to make sure you know exactly what 9 seconds you want. If I filmed someone doing Fran (a workout that takes the elite athletes over 2 mins to complete -Ed.), I only get 1 – 9 second shot and then the camera will be processing the footage while the athlete goes on to complete Fran. For shooting stuff at 23.98 it’s a fantastic camera that captures a beautiful image. 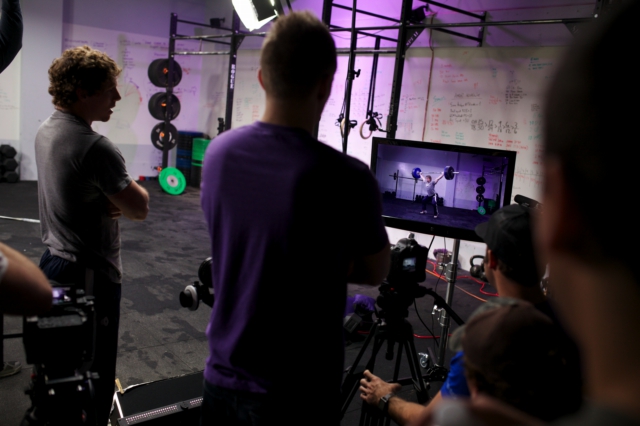 As for my connection to CrossFit. I’ve been working with the company since fall of 2009. I started CrossFit in the fall of 2008 and become friends with CrossFit celebrities Tyson and his better half Miranda Oldroyd. I’d shot some videos for local gyms around the area. Miranda told me I should send my videos to CrossFit HQ and see if they’d be interested in having me film for them. Soon after the initial email they became my biggest client and within a year they asked me to move to Santa Cruz and work with them full time. CrossFit is an incredible and forward thinking company that has pushed me creatively since day one. Since then I’ve done a lot of different projects for CrossFit, ranging from features for the CrossFit Journal to producing the CrossFit Games for ESPN.

A big thanks to Heber for taking the time to give us a little insight into the production world of CrossFit media. He is in the middle of heavy media coverage for the regional competitions that are going on right now, so I doubly appreciate his time and effort to give us a look behind the scenes on this project.