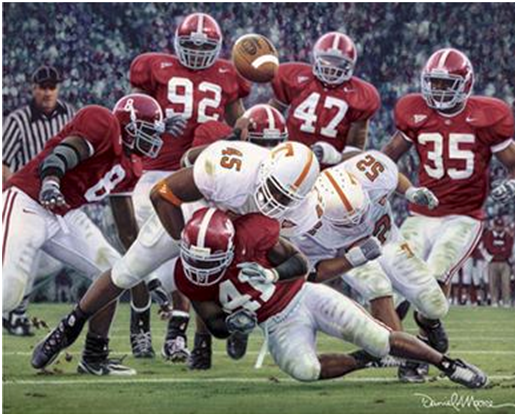 These paintings (like the one shown above) included many of the University of Alabama’s properly registered trademarks. Alabama demanded that Moore pay a licensing fee for using the trademarks in his paintings. Moore contended that he was creating artistic portrayals of historical events and, therefore, his works were protected by the First Amendment.

After a lengthy legal battle, including an appeal process, the court ultimately agreed with Moore in a ruling last week. Not only are his paintings protected to sell as works without a license fee, he is also permitted to transfer his artistic works onto calendars, mugs, t-shirts or other mundane products without a need to pay a license fee.

The American Society of Media Photographers filed an amicus brief in support of Moore’s position in this case, arguing that:

Daniel Moore’s artistic expression does not use the images in which the University claims trademark rights as symbols to identify a source or origin of a product and, therefore, does not constitute infringing activity under the Lanham Act. That said, when a trademark claim is asserted against expression protected by the First Amendment, as Moore’s paintings are, courts have adopted a balancing test to resolve the conflicting interests. Under that test, trademark rights must yield to an artist’s First Amendment rights when the trademarked images have artistic relevance to the underlying expression and do not explicitly mislead as to the source of the work. Moore’s expression at issue here–in all genres–handily passes that test.

And it really should have been that simple. This is such a boneheaded case for Alabama to pursue. It is unfortunate for Mr. Moore that it took so long to resolve.

The ASMP’s interest in this case should be obvious to any photographers who create images to simply sell as art. If anything, Moore’s case should reassure photographers who sell images as artwork that their First Amendment freedom of expression allows them to continue to do so – and even further clarifies that such art may be transferred to other mundane products without the need to obtain a license from a trademark holder.

To be clear, however, the key points of law held by the 11th Circuit Court of Appeals are only binding precedent within the 11th Circuit. That said, the existing case law upon which Moore relied, seems quite well settled in the artist’s favor throughout the entire body of federal trademark law.