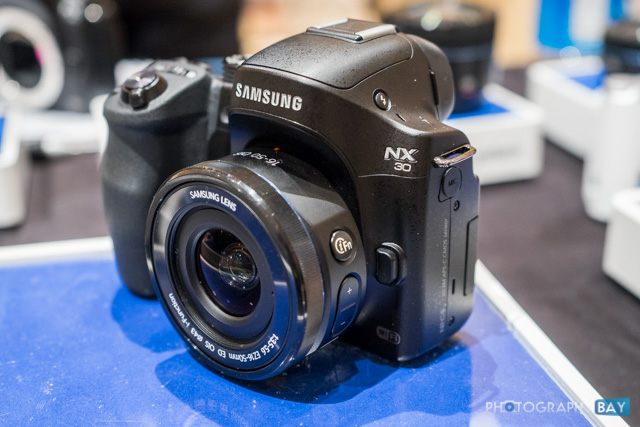 Samsung launched the new NX30 flagship model, alongside its first premium ‘S’ lens, a 16-50mm f/2-2.8 zoom, at CES 2014. The Samsung NX30 remains a 20.3MP APS-C camera (also found in the NX300) with the familiar mirrorless design. The camera boasts some powerful photo-centric features often found in only more advanced (and more expensive) cameras, such as a max 1/8000 shutter speed and a 9fps still image frame rate. Additionally, the NX30 captures 1080/60p HD video, which we are beginning to see from more and more manufacturers. 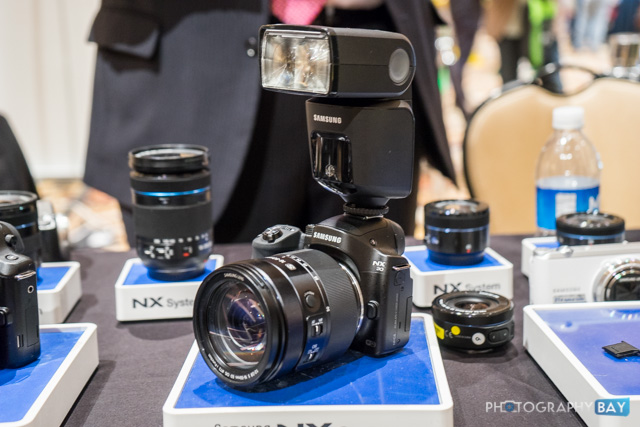 The NX30 is a very connected camera, which is a continuing trend for Samsung. It has features like the ability to automatically upload images to Dropbox and Flickr via a WiFi connection. The NX30 also features the ability to use a Photo Beam feature to transfer images to a smartphone or table by touching the two devices together thanks the NFC connectivity. Additional connectivity options are explained by Samsung as follows:

MobileLink lets users select multiple images to send to four different smart devices at one time – without the need to take repetitive shots on each individual device. AutoShare automatically sends every photo taken instantly to smartphone or tablet devices and the Remote Viewfinder Pro function enables control of the NX30 from a smartphone, allowing the user to capture shots remotely yet still have full visibility of the scene. Manual settings can still be accessed, including shutter speed and aperture, so that photographers can retain camera control. 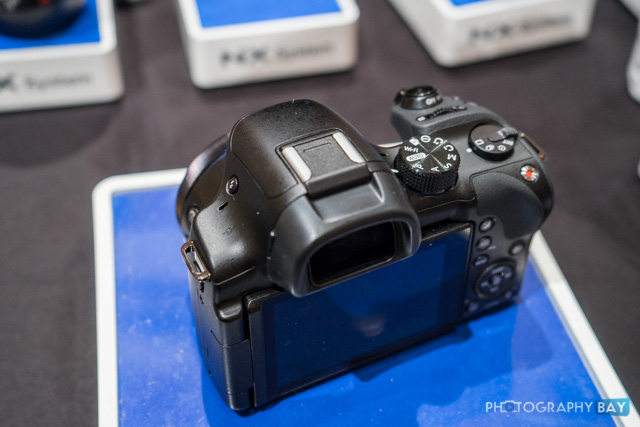 In my short hands-on time with the NX30, I was struck by how much the camera looks, feels and functions like a proper camera. Samsung has stuck with the familiar SLR design; however, the camera features a thinner body thanks to the absence of a reflex mirror and optical viewfinder. While the new 16-50mm f/2-2.8 lens is a hefty piece of glass, the balance is much better than I expected. And that 16-50mm lens is a beautiful piece of glass. The combination of the two yields very fast and accurate autofocus. 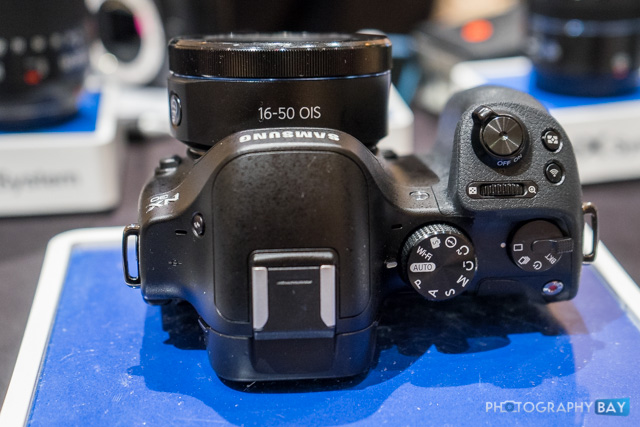 I will also give kudos to the camera controls for the NX30. There are plenty of easily accessible controls on the body of the camera that will make enthusiasts happy that they don’t have to go menu diving to make changes to key manual controls. 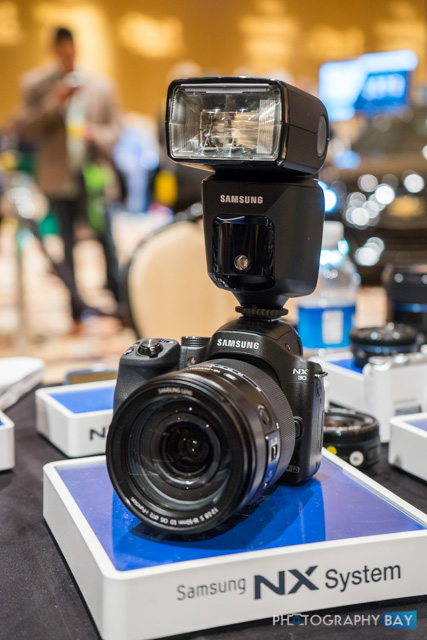 On the down side, the EVF is a bit small for such an ambitious camera. Although the ability to tilt the EVF and look into it from above will certainly please some shooters.

The video capture continues to suffer from pretty bad rolling shutter. You can see this easily on the camera’s display; however, it was also obvious in the reference video that was intended to tout the video capabilities of the camera and shown at the Samsung booth. 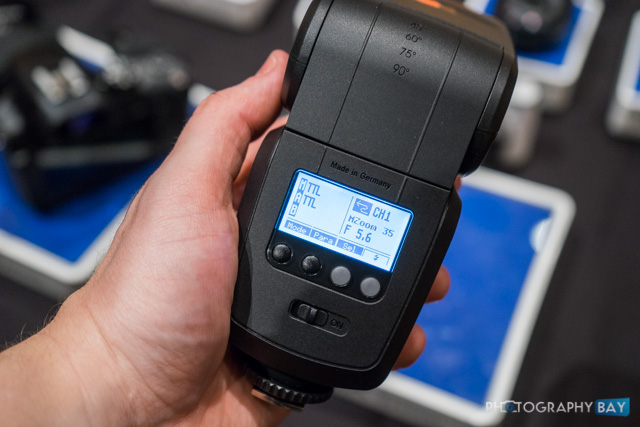 Samsung also had a new speedlight on display that hasn’t been officially released yet. The speedlight seemed to be quite an advanced model, capable of tackling more advanced scenarios alongside the flagship NX30. It is a large flash and definitely adds more bulk to the camera – particularly when paired with the new 16-50mm f/2-2.8 lens. 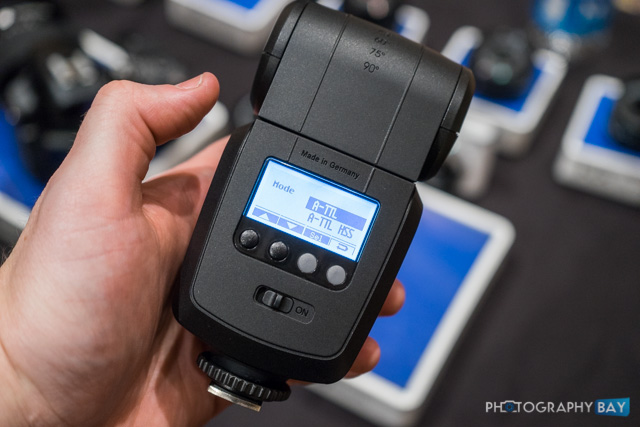 The speedlight should be capable of wireless operation as well. 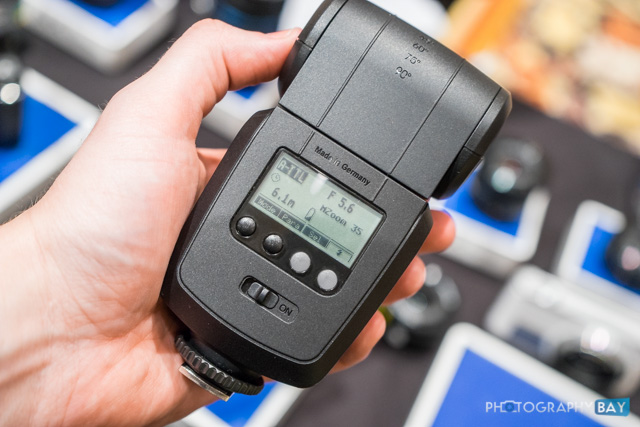 The new crop of gear in the Samsung NX series suggests that Samsung is beginning to put together a serious kit for the more serious photographer. I expect we will see more as 2014 rolls on. If not at CP+ next month, it will be interesting to see where Samsung’s NX line is situated by the time Photokina rolls around late summer.