One of the things I wanted to do during my review of the Sony A7 and A7R was to put the video features through their paces. With the help of my uncharacteristically cooperative kids, I shot the above short, Nerfed, in a few hours using only the Sony A7 and A7R (along with a couple of shots with the GoPro Hero3 that were necessary for the plot). After using these cameras for this fun project and in other ways over the past few weeks, Sony makes a great case for its next generation of full frame cameras.

The Sony A7 and A7R have quite the powerful video feature set that might make mainstream HDSLRs a little jealous. Sony certainly hasn’t been one to hold back video features on its cameras over the past couple years (in stark contrast to Canon’s segmentation of features based on the MSRP).

Key video-centric features you’ll find on the A7 and A7R making them very attractive for video shooters (and maybe the best option around) include:

The A7 and A7R are much smaller than your typical full frame DSLR. They shoot HD video at up to 1080/60p in a lightweight and compact package that you can’t get from Canon or Nikon.

The cameras have great face-detect AF during video capture, which I used for most of the shots in Nerfed. The final jib shot of the scene would have been impossible without face-detect AF. We had a roughly 6-foot jib shot using the A7R and the Sonnar T* FE 35mm 2.8 ZA lens. It was completely autofocus and the camera’s face-detect held focus on every take. There would have been no way to get that with a manual focus pull without using a remote. To say that I am pleased with the video AF of these cameras is an understatement. With the right E-mount lenses, the A7 cameras deliver impressive video AF performance that I have not seen in HDSLR-type cameras yet.

The EVF on the Sony A7 and A7R is outstanding. It works great for video or still shooting. It’s big, bright and there is no lag. If you are shooting handheld video, you can use your eye on the EVF as a third point of contact for additional stability.

I used to be one to grip about tilting displays over swing-out vari-angle displays. I’m starting to change my thoughts on this. On the stills side, I have specific reasons I like the tilting LCD a little more on the A7 and A7R, but on the video side of things, there isn’t much room to complain about the need to view it at vertical angles. It also beats the heck out of the angle options on the Canon 5D Mark III and Nikon D800 (there aren’t any options).

The tilting display allows you to see your shots from high or low positions without needing to be directly behind the camera.

This really should be an option on every serious camera that offers video capture. The ability to easily determine exposure on specific areas of the scene is something zebras deliver that histograms just can’t.

Again, another sign of a serious video-capable camera. Focus peaking allows you to manually focus when autofocus doesn’t cut it or if you are using lenses that don’t offer AF on the A7 and A7R.

Fortunately, this is a standard on video-capable cameras now. Not only do the A7 and A7R cameras feature a mic input, but you also get levels on screen while recording. The input provides 2.5v plug-in power, which allows you to use battery-less mics like the Rode VideoMic Go pictured above. 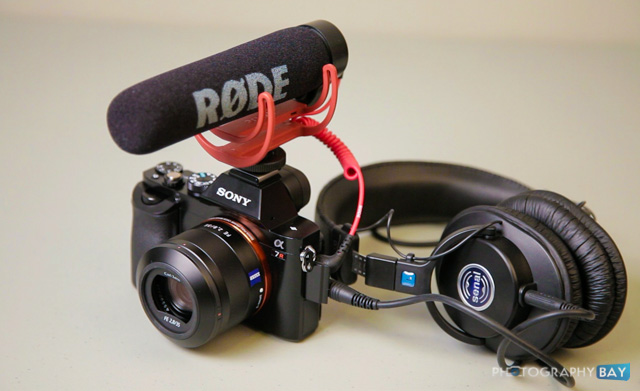 This is a starting to become more and more of a standard feature on cameras that cost $1000 or more. Canon is the big hold-out here – only adding the feature on the 5D Mark III and Canon 1D C thus far. Even the new video-centric Canon 70D fails to offer a headphone output.  Sony wisely recognizes the importance of the ability to monitor audio (for even amateur and enthusiast shooters) and delivers on the simple option.

If you want higher data rates though, you can use the HDMI output from the cameras for uncompressed, clean 8-bit 4:2:2 footage out to an external recorder in either 60i or 60p frame rates. 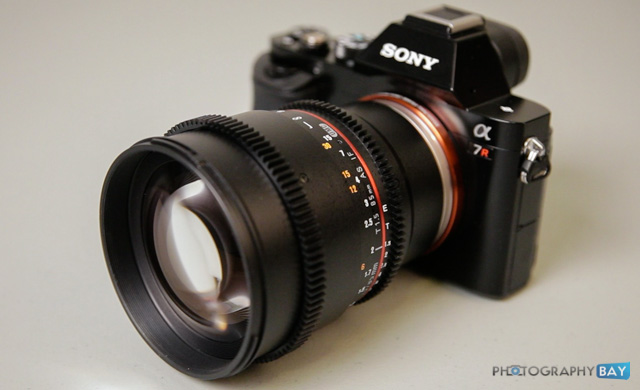 As noted above, the face-detect AF with native E-mount lenses is awesome and I used it for nearly all of the shots in Nerfed. The exceptions were shots using the (very affordable) Rokinon 85mm T1.5 cine lens, which is manual focus only – but it has aperture and focus ring gears, along with a very smooth focus throw. Likewise, I used some A-mount lenses with the Sony E-Mount to A-Mount adapter. A-mount lenses are terribly slow and AF only really works to confirm focus on a static shot. 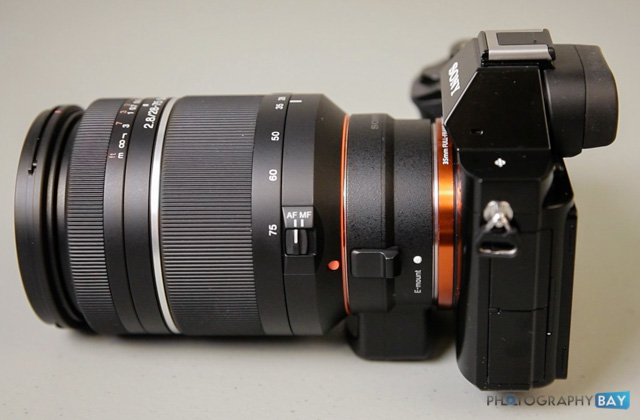 In addition to the Sony A-mount adapter, Sony has been on the offensive encouraging users to use third-party lenses and adapters with its E-mount cameras. You can find adapters for most lens mounts out there, including everything from Leica M-mount glass to cinema-grade PL-mount lenses.

I have been very impressed with the Sony A7 and A7R as both still and video cameras. While there are some still image features that might not be quite in the realm of high-end DSLRs just yet, the A7 cameras deliver solid performance as full frame video shooters.

What features impress from these new full frame mirrorless cameras impress you the most? Or, are they still not up to snuff in the DSLR-driven world?