Nikon FX and DX lenses refer to the format of image sensors on which the lenses are intended to operate. Nikon makes DSLRs with these two types of sensor formats (FX and DX) – also referred to as full frame and APS-C (or, crop sensor), respectively.

The Nikon DX (or, APS-C) sensor is smaller at 24mm x 16mm, which is also slightly larger than Canon’s APS-C format. The field of view (how much of a scene you can see through the viewfinder) is smaller when using the same lens on an APS-C format camera than it would be on a full frame camera. 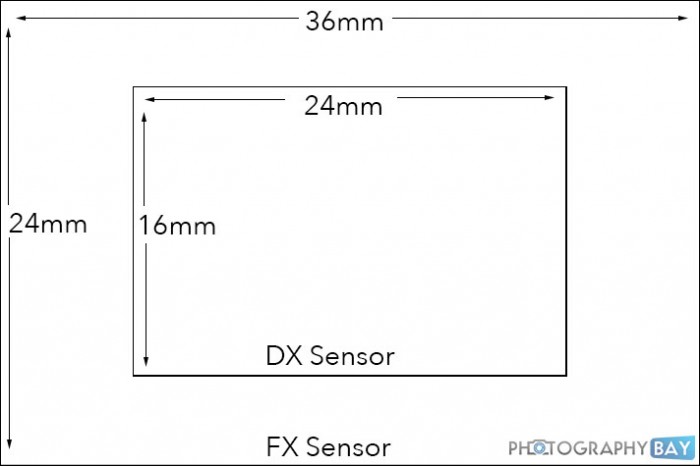 For example, a Nikon AF-S 50mm f/1.8G FX format lens produces a field of view equivalent to an 75mm lens when used on a Nikon DX (or APS-C) format camera like the Nikon D7100 line. This is often times referred to as a “crop factor”.

So, Nikon DX cameras have a 1.5x crop factor.

Unlike the Canon system Nikon FX and DX lenses can be used interchangeably on either FX or DX cameras. However, the general rule is that DX lenses are design for use with Nikon DX format cameras like the D7100.

Due to the crop factor, the common kit lenses also look different in terms of price and focal lengths for each format. Kit lenses for DX cameras are typically lenses like the 18-55mm and 18-105mm lenses. Typical Nikon FX format “kit” lenses are considered 24-120mm and 24-70mm lenses.

Advanced users may prefer to spend more money on a higher quality FX format lens to use with a DX format camera due to the overall quality of glass in the lens; however, that is a discussion for another day.

As mentioned above, DX lenses can be used on Nikon FX cameras like the D4S and D810. This is possible thanks to Nikon’s smart inclusion of a feature called “DX Crop Mode.”

Essentially, DX Crop Mode avoids the heavy vignetting that we would otherwise experience when using a DX lens on an FX camera by only recording the image using a smaller section in the center of the sensor. Of course, this results in an image with a reduced resolution. However, when you consider the D810 has a 36MP FX sensor, the DX Crop Mode still provides a final image with 15.3MP resolution. Not a bad trade-off at all.

Nikon DX lenses are generally smaller and lighter than Nikon FX lenses because less glass and a smaller lens barrel is required to produce an equivalent field of view for a lens that goes on an DX camera, like the Nikon D5300 and D3200 lines, when compared to a full frame camera. Additionally, as mentioned above, the DX line of lenses are generally more affordable.

Should I Buy FX or DX Lenses?

Hopefully, you are now aware of which Nikon lenses are compatible with your camera. As to which lens you should buy, my suggestion is to buy the one that fits your needs. If you want an extremely wide angle lens for your Nikon D3200 or D7100, then you’ll need to look at the DX line of lenses for something like the Nikon 10-24mm f/3.5-4.5G ED DX lens, which will look like a 15-36mm lens on your camera. You can’t find a non-fisheye lens this wide in Nikon’s FX line up.

If you are worried that you might upgrade someday to a full frame camera, don’t. Quality DX lenses hold their resale value just fine. And, of course, your DX lenses will work on any Nikon FX camera that you buy in the future.

Buy the lens that fits your needs now. If that means you want a massive FX telephoto lens, then go ahead. If you upgrade to a full frame camera later, it will work fine as well.