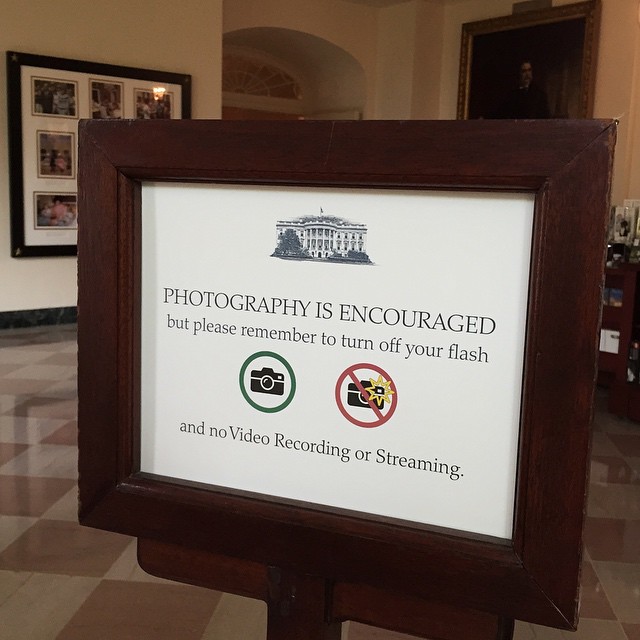 The White House lifted a decades-old ban on photography during public tours. The news came via an Instagram video by Michelle Obama, in which she literally tore up the sign that gave notice of “No photos or social media allowed.”

Big news! Starting today, we’re lifting the ban on cameras and photos on the @WhiteHouse public tour. Visitors are now able to take photos and keep those memories for a lifetime! ? To learn how to schedule a tour with your friends and family, visit whitehouse.gov.

While the ban has been lifted, there are still limits placed on photography, including no video cameras, interchangeable lens cameras, flash photography or tripods.

The new policy that went in effect today, specifically provides:

As of July 1, 2015, Smartphones and compact cameras with a lens no longer than 3 inches (stills only) are permitted on the public tour route as long as their use does not interfere with other guests’ enjoyment of the tour.

Video cameras including any action camcorders, cameras with detachable lenses, tablets, tripods, monopods and camera sticks are not permitted.

Flash photography or live stream as well as talking or texting on cellular phones is not permitted while on the tour.

For the most part, the limitations are reasonable; however, there are many cameras that fall into the “cameras with detachable lenses” prohibition that are actually smaller than many other “compact cameras.” The ban covers tiny cameras like the Panasonic GM5 but not the larger Fuji X100T.

Of course, these are nuances that mainly apply to us photo geeks. The overall move is a good one that allows the general public to capture photos with the smartphones and compact cameras. Any trend where we can see the government ease up on photography restrictions is a good trend.