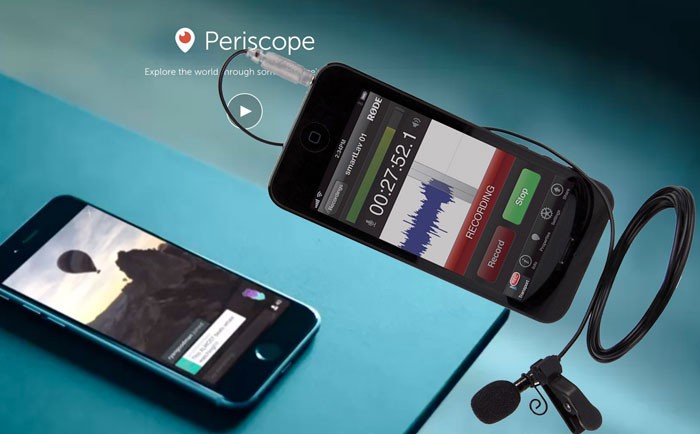 If you haven’t heard of Periscope, it’s the latest social media product from Twitter that allows you to live stream video from your iPhone or Android smartphone.

One of the difficulties however is capturing good audio for your viewers since it is captured on something like the iPhone. Now, the iPhone does okay in for delivering audio to Periscope when you are in a quiet setting . . . but add some ambient noise and the experience is less than ideal.

When I was at NAB this year, I sat in on a fantastic panel put on by Red Giant that featured a number of online filmmakers like Freddie Wong, Sam Gorski and Niko Pueringer from Corridor Digital, Seth Worley, Stu Maschwitz and Ryan Connolly, among others. Someone from the PR company set up a phone to Periscope the panel but, unfortunately, no one watching on Periscope could really hear the panel members’ responses because of the crappy iPhone mic. That was a real bummer for people watching online because it was great content ruined by sorry audio quality.

Watch this video from Rode that shows how NewsShooter.com approached Periscope use at the recent SMPTE 2015 expo.

Rode’s SmartLav+ is one way to capture better audio, which you can see used in the video above alongside the Rode Reporter mic being used for the production audio on the main camera. Of course, the audio on the SmartLav+ still doesn’t sound as good as the Reporter but it reduces the loud trade show ambient noise that the iPhone alone would otherwise blend together with the speaker’s voice.

It looks like a great solution for producing better overall Periscope streams. We’ll not discuss the vertical video for now though….