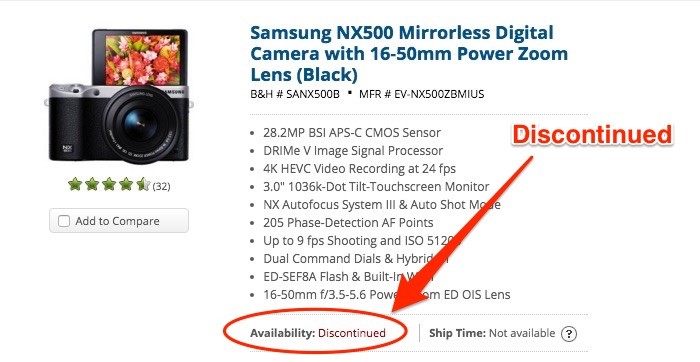 We have all pretty much accepted it now. Samsung and its mirrorless camera system is dead in the water. The Samsung NX500 that is barely a year old is now discontinued.

It had a solid spec sheet and plenty of positive reviews as one of the first 4K mirrorless cameras – especially at that $800 retail price point.

The even more impressive Samsung NX1 continues to lumber along at reduced prices that come and go. Currently, the NX1 with the 16-50mm power zoom lens is going for $1199. It was originally $1699 and then recently dropped to $1299. While it’s on backorder B&H, it looks like they are still accepting orders at this price. Currently, this would be my only “buy” recommendation in the NX1 options.

The NX1 is a solid camera and that 16-50mm f/2-2.8 lens is pretty sexy. If you can live with the rest of the lens limitations for the NX line, you may be able to pick of a nice camera that will last a few years on the cheap soon.