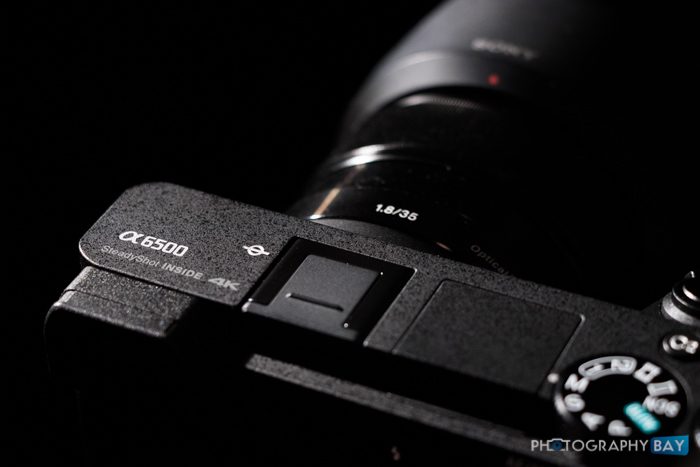 The Sony A6500 is a mid-range, prosumer mirrorless camera. It follows an established line of products that go back to the NEX-6 model when Sony separated the Alpha branding for A-mount SLT cameras from its E-mount mirrorless cameras. The A6500’s two predecessors (A6300 and A6000) remain in the current product lineup as lower-end prosumer models, while the A6500 serves as the flagship APS-C format camera for its mirrorless line.

I’ve owned the Sony A6000 for a couple years now. While I like the A6000 just fine, it is still a step or two behind the Canon 80D and Nikon D7200. I can’t say that anymore with the Sony A6500. It deserves equal consideration among the DSLR establishment in the prosumer line. 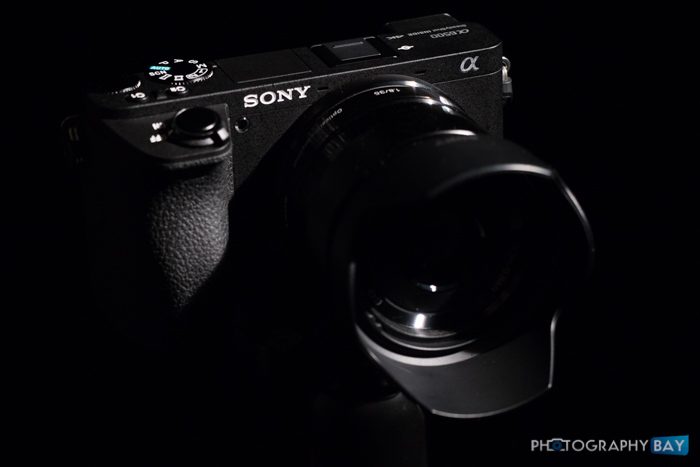 The Sony A6500 brings a few generations of refinement to the E-mount product line. Sony’s sensors only continue to get better – and the 24.2MP APS-C sensor inside the A6500 delivers professional caliber images that stand up to Canon and Nikon’s lines. The upgraded 425 phase-detection AF points make the A6500’s AF-system a legitimate shooter in the most challenging action and lighting scenarios. Finally, the 4K and high frame rate video options put the A6500 at the top of video shooter’s lists as an affordable option for cinematic 4K video capture.

Perhaps most importantly, the size and form factor of the A6500 makes is a very practical “serious” camera for nearly everyone from parents and grandparents to professional shooters looking for a compact kit.

I had a couple lenses paired with the A6500 for this review – the 16-50mm kit lens and the 35mm f/1.8. The 35mm lens stayed on the camera most of the time. It’s a great, affordable lens that is a perfect everyday option for the A6500. It offers the equivalent field of view as about a 50mm lens on a full frame camera.

The A6500 is a camera that you can pick up and shoot in Auto mode and it will deliver solid images for the novice – especially if you pair it with a great lens like the 35mm f/1.8. However, it has some very advanced features that aren’t available on other cameras of its ilk. For example, you can have the spot metering follow the selected AF point, which means you aren’t stuck with spot metering at the center of the frame (like the 80D and most other Canon DSLRs).

Sony has come a long way in the controls and menu navigation over the years. Anyone that remembers using the early NEX camera series knows what I’m saying here. The menus were nonsensical on those early models as Sony was trying to find its way with the E-mount and design a camera from scratch. Clearly, Sony continues to take the feedback to heart from those early designs and keeps delivering more user-friendly cameras.

As the mirrorless form-factor and design continues to evolve, it still has a ways to go to figure out the new normal – particularly for external button, dial and switch placement. Any prosumer DSLR you pick up today will have a pretty consistent button and dial layout. While there are certainly variations between Canon and Nikon, the overall feel and access is actually quite similar when you compare them to something like the A6500.

Sony’s menu system is so much better today than it was a few years ago. The A6500 continues to use the page and tab-style menu system, which I happen to like (as a Canon user). The button layout, however, is a little cramped on the A6500. Given the size of the body, this is not unsurprising. While the Canon 80D gives you a number of labeled button options across the top of the camera, we get a mode dial, a completely blank dial and pair of custom programmable buttons. That’s a bit intimidating for the first time Sony shooter. 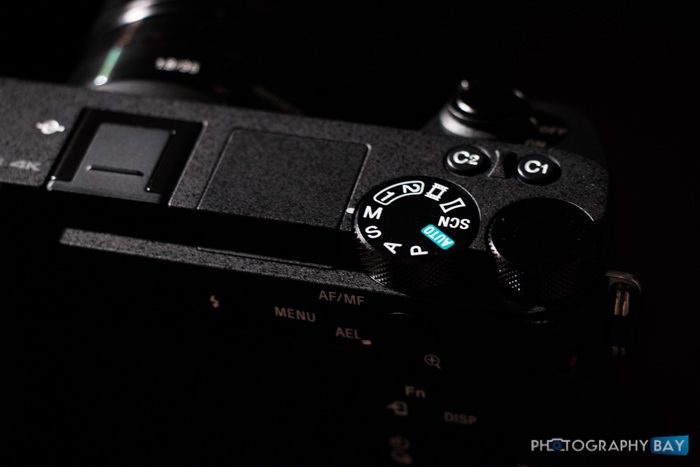 The back of the camera packs in loads of buttons and a selector wheel on the right half of the camera. A very unfortunately placed record button triggers video capture during the frequent accidental triggers by your thumb. This record button basically rests on the back corner of the grip. It’s only really easy to press when you trigger it accidentally. Pressing it intentionally is actually a challenge. 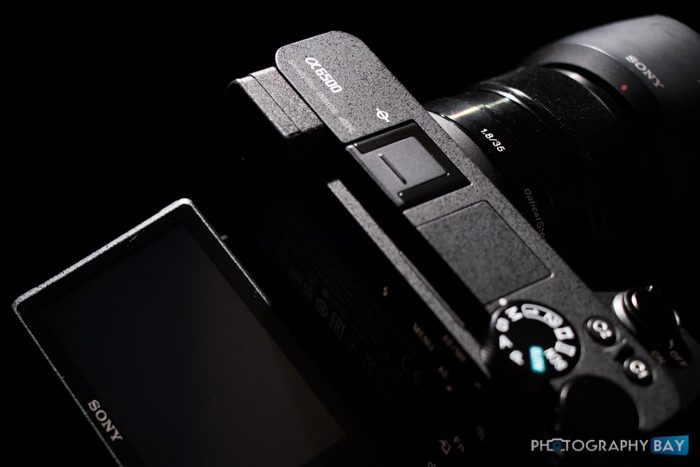 One more quibble about the ergonomics and handling and I’ll move on to more positive points. I don’t understand why Sony continues to put these half-baked tilting LCD screens on its mirrorless cameras. In a world of vloggers, why wouldn’t you either enable the LCD to tilt 180° (like the Sony A5100) or (because the EVF is in the way) make the LCD on a vari-angle swivel like the Canon 80D?

The EVF is great on the A6500. As a prosumer model, there is just no question that a capable EVF must available on the camera. I walked around a mini golf course with my wife and daughter a few days ago and took a few candid photos with the A6500. I found myself using the EVF more often than not due to the glare from the sun.

With all the live view use, the A6500 tends to chew through its battery faster than a DSLR like the Canon 80D or Nikon D7200. While it was never an issue for me to kill a battery in a single outing, heavy use of the A6500 is going to kill batteries sooner than DSLR users are accustomed to. Since I own a Sony A6000, I had a couple spare batteries anyway. If you are buying the A6500, I’d recommend doing the same. Additionally, I would suggest picking up the Sony battery charger since the A6500 just comes with a USB cable for charging. I hate charging the camera with a USB cable and bought one of these back when I bought my A6000.

The Sony A6500 adds in-camera image stabilization. As a result, you now get the benefit of image stabilization no matter the lens attached. I find this a big step up from the A6000 and A6300. With good camera technique, you can really drag down to slow shutter speeds with longer lenses. I feel like I can squeeze an extra 3-4 stops out of the shutter speed with the A6500 thanks to the in-body stabilization.

The A6500 AF performance is top-notch and can hold its own with any DSLR in its range. I certainly don’t feel that way about my A6000 but that changed with the A6300 – and now the A6500. Couple that with its blazing frame rate up to 11 fps and you really start to question why you need a DSLR at all.

The image quality from the Sony A6500 is very good from an APS-C camera. I wasn’t ever really concerned with shooting in lower light. Sony and Nikon seem to have the APS-C sensor and processing figured out – largely thanks to the excellent Sony image sensors.

While the A6500 can shoot up to extremely high ISO levels (up to ISO 51,200), I do recommend staying a bit lower for usable images. That said, I have no issues for shooting most images at ISO 6400 and lower.

Take a look at the ISO comparison I put together below. First, here’s an image of the scene, which is a shadowy image of my lighting model, Elizabeth, that I use for occasional lighting setup. 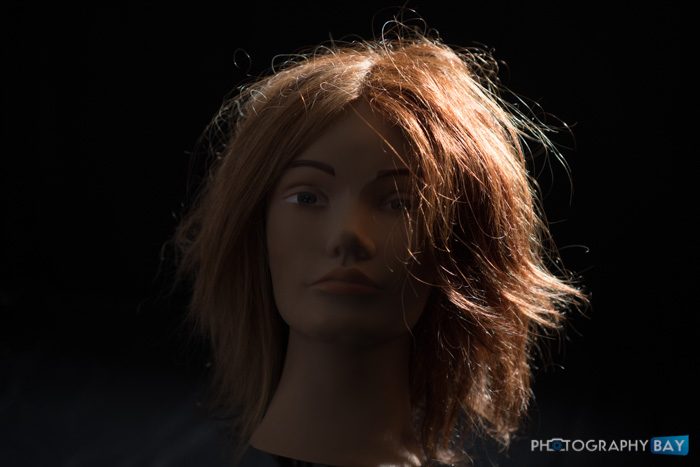 I cropped into the shadows of her left eye, along with a bit of the highlights in her hair. I shot a frame with RAW and exported it with no edits to a JPEG for the crop you see below. 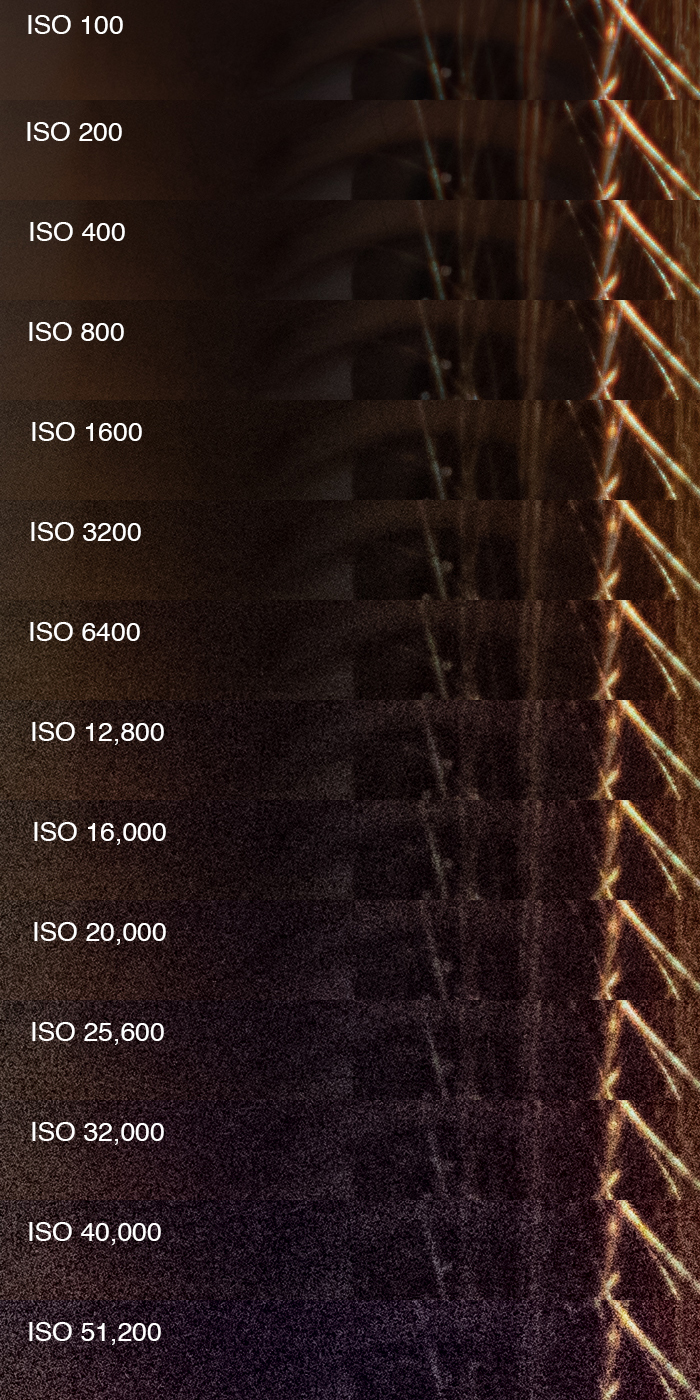 I think the A6500 looks pretty good up to ISO 6400. While there is definitely some grain there, the bluish chroma noise doesn’t start to be pronounced until ISO 12,800 and it doesn’t really fall apart completely until ISO 25,600 or so.

As a prosumer shooter, I love the ISO range this camera delivers. And I think there is plenty to offer the pros for quality and performance it delivers compared to its DSLR counterparts.

Below are a few more sample images I shot with the A6500. 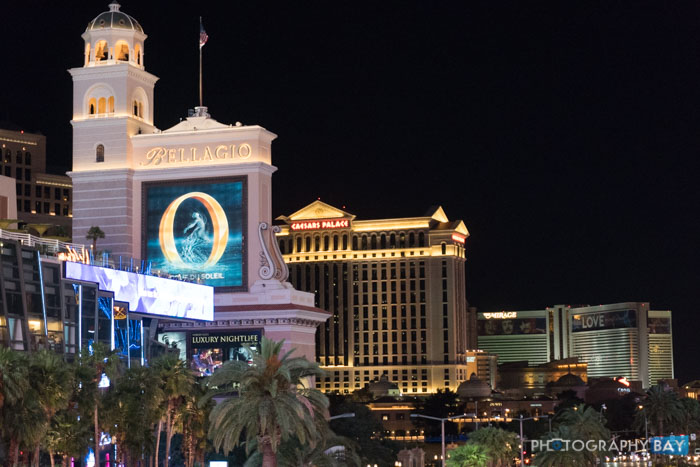 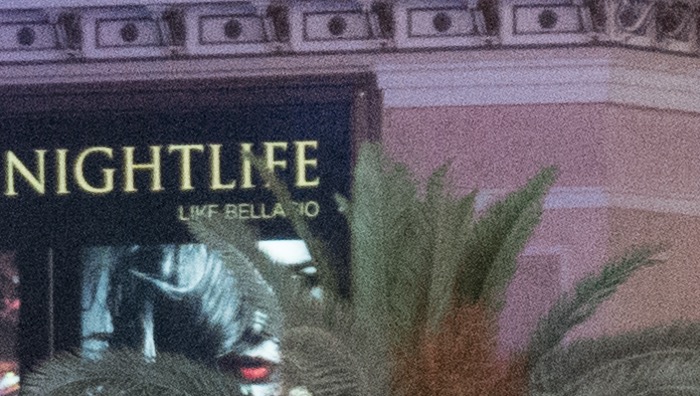 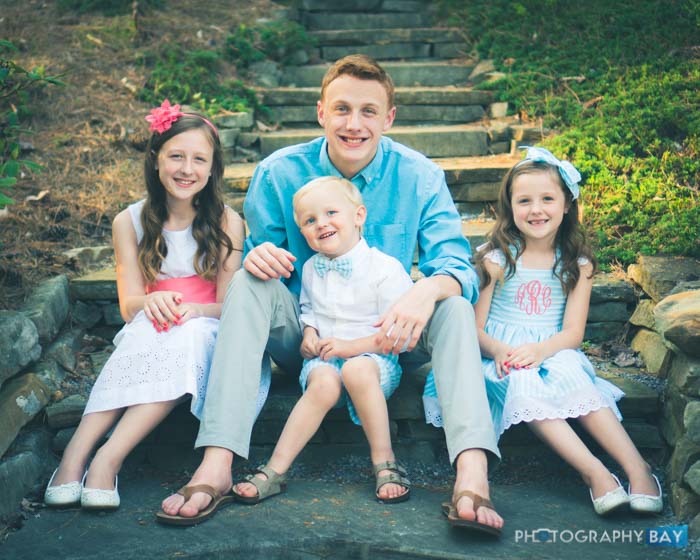 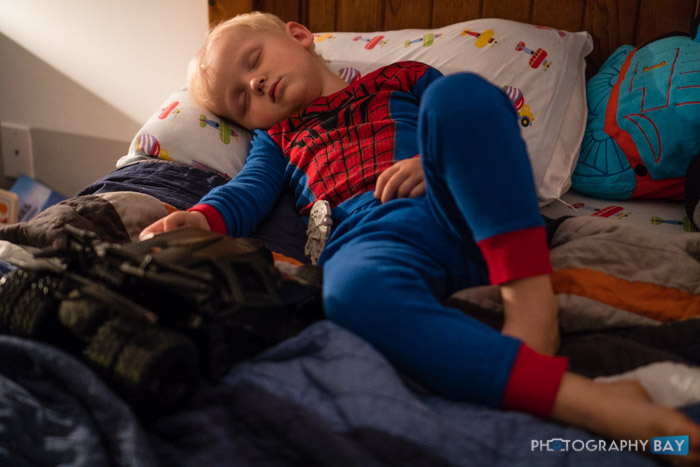 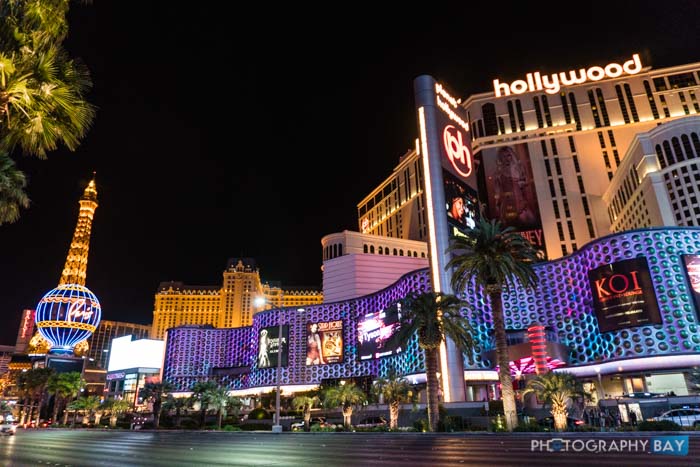 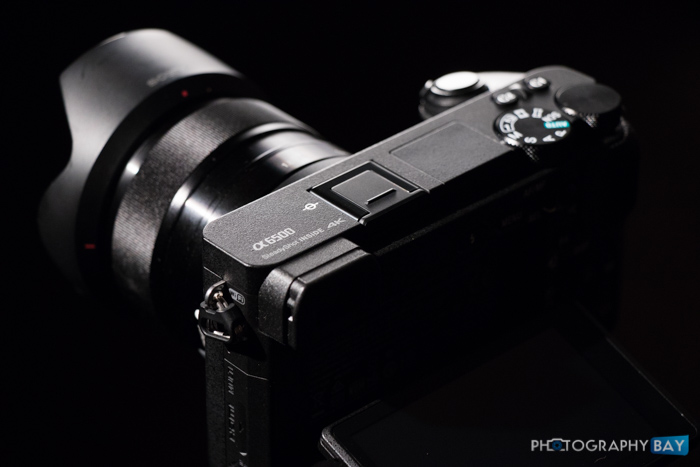 The A6500 delivers on just about everything we’ve hoped for in a mirrorless camera since Sony launched the NEX line over seven years ago. I’ve used most of Sony’s mirrorless cameras and I’ve owned several since the NEX-3 and NEX-5 came out. The maturity of the brand and technology is here with the A6500. For the price and performance across both still and video capture, the A6500 is the tip of the spear today.

The Sony A6500 is available from Photography Bay’s trusted retail partner, B&H Photo, at the following link: