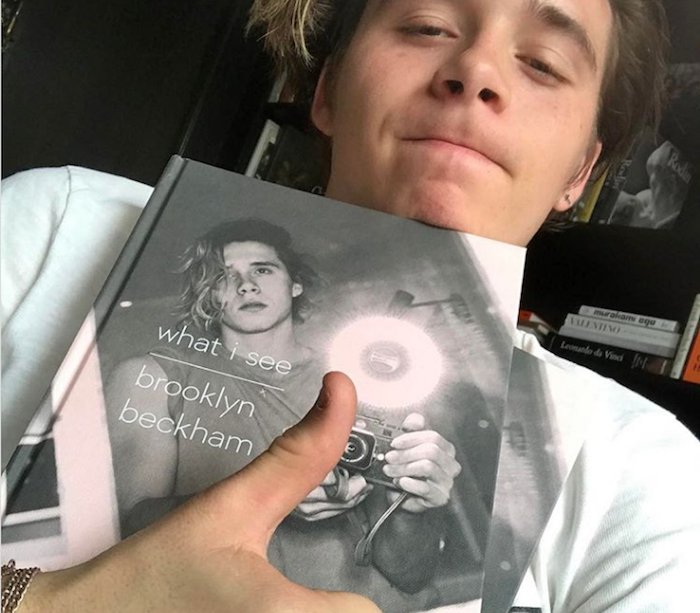 People are just nasty on the Internet.

Brooklyn Beckham, the 18-year-old son of soccer star David Beckham, is publishing a photo book. What I See is a hardcover photo book featuring a “collection of around 300 personal photographs – most shot by him but with some shots of Brooklyn taken by others — offering a rare and intimate glimpse of the world through his eyes.”

Beckham has been in the public eye as a model and has amassed an Instagram following of over 10 million people, to which he shares his photography, along with modeling photos of himself.

Last week, Beckham shared a selfie with a copy of his new book on Instagram, embedded below.

Look what just arrived… so excited #whatisee is finally here. Can’t wait to meet some of you next week at signings, who’s coming?

After the photo went live on Instagram, the self-annointed photo critics of the Internet absolutely lost their minds.

Brooklyn Beckham's book of photos show us one thing. You can be talentless but relates to a celeb or two and you'll get published no bother

Is this book titled 'How Not to Photograph Things with Brooklyn Beckham'? If it is then it looks good value for money. https://t.co/S0PqbxaUpk

This is just a tiny sampling of the massive hate-filled messages being slung his way. Plenty of bloggers and comment threads have taken aim at attacking Beckham’s photography and screaming nepotism is the only reason he got a book deal.

The kid has over 10 million followers on Instagram, which is a place where he does what? Posts photos.

While we live in a digital world now, Beckham clearly has an affinity for analog. Most of the shots of him with a camera, show him using a film camera rather than a DSLR. So, it kinda makes sense that he’d like to put his analog photos out in analog form.

Moreover, he clearly has a passion for photography, regardless of where his technical skill falls now. What will be interesting to see is what his images look like in a decade, assuming he sticks with it.

Artistic value has always been in the eye of the beholder. You may cringe at some of Beckham’s work but that doesn’t meet that it isn’t enjoyable to his fans. I always think about great photography as a combination of a great skill and a great subject. But many times, a great subject and marginal skill is all you neet to make a great photograph. For those 10 million-plus fans, the great subject is found on either side of the camera with Beckham.

If you are a publisher and want to sell books, wouldn’t it make sense the publish a book with an author that has the attention of over 10 million people?

Everyone who thinks they “deserve” a photo book because their photography is better than Beckham’s, go make your own. Something tells me your “great” photography won’t sell at the same level when you pitch it to your 582 followers.

Now, let’s turn the tide. Who, at the age of 18, wouldn’t dive in head first into a passion project and publish a photography book if given the opportunity?

Let’s say you have parents with a net worth north of $450 million-ish, like the Beckhams. Do you buy that Leica or Hasselblad you really want that every photographer says is the standard by which you should compare all others? Or, do you buy the Canon Rebel T6i?

I want a Leica and a Hasselblad but I shoot with a Canon 5D Mark II and an old Mayima 645AFD. Am I so petty that I care what an 18-year-old rich kid shoots with? Um, no. Do I blame him for buying the best? Of course not. I’d buy the same stuff.

I don’t know anything about Brooklyn Beckham other than some the nasty responses I’ve read to his book launch online today and browsing through his photos on Instagram. He could be a terrible person or he could be a saint. However, raking the kid over the coals because he got published and you didn’t is petty jelously and the worst of what the Internet is about.

How many of these jackasses would say these things to his face? None. Everyone is an expert and tough guy behind a keyboard.

What is the kid suppose to do anyway? Just forget about photography and hang his camera up for good? Take photos and never share them? Then, he’d be called out for being too secretive about his life and snotty to his fans.

The kid was born to rich and famous parents. Lucky for him. But you don’t have to hate him for that alone.

His book’s success will be determined by a free and open market. Your book will too.