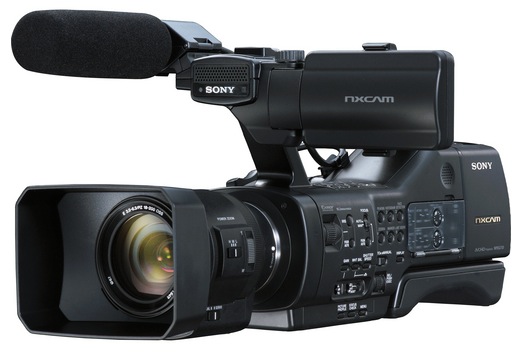 Given the features available on this camcorder, I am quite impressed with the low price point.  The NEX-EA50 should be available in October.  You can order it here at B&H Photo.

The new Sony NEX-EA50 was quite the surprise when Sony unveiled it a couple of weeks ago.  Dan Chung of DSLR News Shooter recently got a hands-on demo of the new APS-C powered, ENG-style camera at the BIRTV show in Beijing.

Check out the video below for a walkthrough of the NEX-EA50’s features. END_OF_DOCUMENT_TOKEN_TO_BE_REPLACED

The Sony NEX-EA50UH is a new pro-grade APS-C format camcorder equipped with an 18-200mm servo zoom lens for a more traditional ENG cam feel.  The NEX-EA50UH captures 1080p video at up to 60p in Sony’s staple AVCHD format.  The camera is equipped with a 16MP Exmor APS-C CMOS sensor. END_OF_DOCUMENT_TOKEN_TO_BE_REPLACED

As I was flipping through the channels tonight, I landed on 60 Minutes’ feature on Alex Honnold, who free climbs up huge rock faces.  He does stuff without a rope that no other person can do – or at least is willing to do.

The story alone is compelling enough to hear; however, 60 Minutes did a bang up job of capturing it on video with a mix of 14 ENG, DSLRs and GoPro cameras.  They mounted GoPro cameras on the rock wall, on the film crew climbers on the wall and even on Alex’s chalk bag belt (until he decided to ditch it mid-climb). END_OF_DOCUMENT_TOKEN_TO_BE_REPLACED