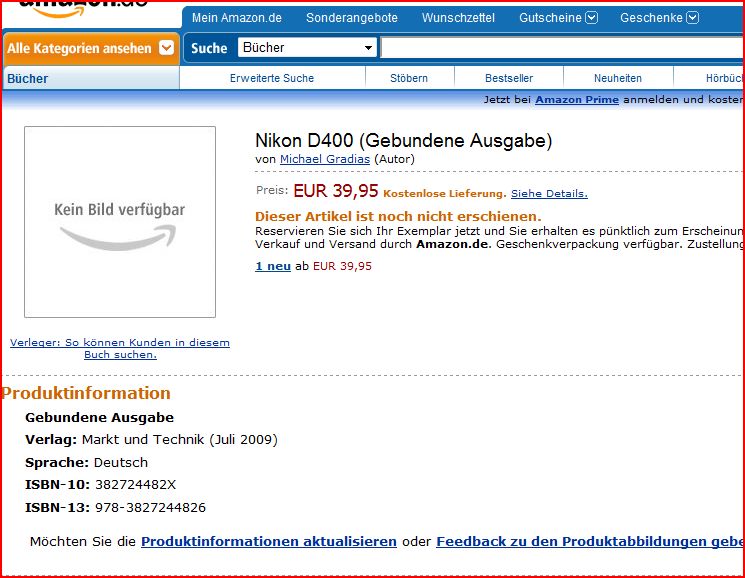 Several dates have recently surfaced regarding the release of the Nikon D400, which everyone thought would appear at PMA.  With Canon’s announcement of the Rebel T1i out of the way, many expect Nikon’s D400 news to be imminent.  The consensus appears to be April 14th as the date Nikon has invited certain publications to a press conferences.

Additional speculation suggests that it may not be the D400 that arrives, but rather a D40/D60 line of camera that is introduced.  Of course, Nikon could drop a couple of new models like they did with the D3/D300 combo.

Nikon Rumors put together a translated version of a press invite, which suggests multiple products released on April 14.

Nikon is pleased to offer you its exclusive new product highlights to be able to imagine.
On this occasion, Nikon Austria you would like to cordially invite a press breakfast.
In good tradition, the breakfast at the Hotel Sacher again instead.

Following the presentation is available from Nikon happy to take questions from you and looks forward to a stimulating exchange of information.
We look forward to your visit and ask for your response to Mr. xxxxx,
Yours sincerely,
xxxxx

For the latest news and rumors, stay tuned to Photography Bay’s Nikon D400 page. Also, keep up with the Nikon D65 rumors.

That means the rumors for the Nikon D5000, D65 and D400 were bogus rumors . . . as far as PMA releases are concerned.  We’ll be keeping the ears to the ground though for possible Summer 2009 DSLR releases.

As noted yesterday, Nikon is really pushing the success of the D700, among its other DSLRs.

You can bet that Nikon will be refreshing the D60 line soon.  Will the new camera be called the Nikon D65?  I don’t know; however, Nikon Rumors got some info from an unknown source on a possible D65 with the following specs:

Frankly, I think anyone could take a guess at those features and end up being pretty close to the real thing.  Consider this a blanket rumor for now.  I’ll keep you posted if any firms up on the Nikon D65.

Stay tuned to Photography Bay’s PMA 2009 Preview for the latest news and rumors as we get closer to PMA 2009.