First up, I’ve got a more in-depth overview of the Sony NEX-VG10 over at Tech Tilt.

And second, I just wanted to point out that the location product shots of the NEX-VG10 appear to have been captured with a Sony A850 and Zeiss lenses.  I realize that’s not quite as juicy as a 5D Mark II on Sony’s set (and I’m sure this will generate the obligatory “who cares” comment), but I figured I’d give Sony a bit of credit where credit is due.

The Sony A850 and A900 are full frame cameras that pack in 24.6-megapixels on that big sensor.  The cameras appear at the top-end of the Alpha system line up.  At first blush, the A850 appears almost identical to the pricier Sony A900.  After delving deeper into the A850, you’ll discover that there’s really not a whole lot of difference between it and the A900.

Because of the similarities between these two cameras and the fact that I reviewed them simultaneous, I decided to publish one review for both cameras rather than than two separate reviews with only minor changes in the text. END_OF_DOCUMENT_TOKEN_TO_BE_REPLACED

Although, comparing these two cameras to the Canon 5D Mark II, which is the current prosumer state of the art for low-light performance, is another story.  You’ll also see some Canon 7D samples at higher ISOs for the sake of comparing a crop-sensor camera to these full framers.  To see how the Sony A850 and A900 stack up, read on. END_OF_DOCUMENT_TOKEN_TO_BE_REPLACED

Sony has officially announced the Sony A850, which is a full frame 24.6-megapixel CMOS sensor.  The A850 also features SteadyShot sensor-based image stabilization, a 3-inch 921k dot LCD and a 9-point AF.

The A850 should be available in November 2009 at an initial retail price of $2000.  Check availability at Amazon.com.

More details in the press release below. END_OF_DOCUMENT_TOKEN_TO_BE_REPLACED

If the report is to be believed, which it appears credible, the Sony A500 specs appear to be as follows: END_OF_DOCUMENT_TOKEN_TO_BE_REPLACED 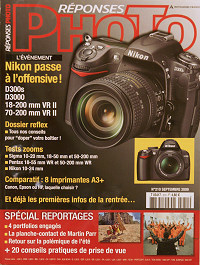 Fotobrenner has also posted an image of the A850 on its product page, which is either the same body as the A900 or is a Photoshop job to give us something to look at. 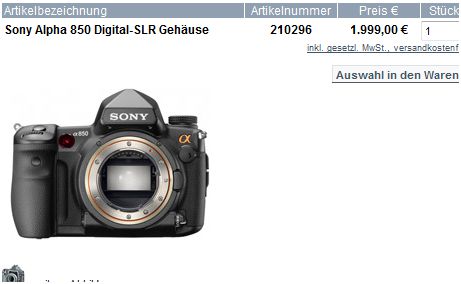 Recall that the Sony A850 manual was leaked directly from Sony a couple weeks ago.

What do you think?  Legit?  Or is Fotobrenner just following the rumor trail like the rest of us?

More presumed leaks directly from Sony.  This time, you can add the A750 and A950 to the already unveiled Sony A850.  The hole appears to already have been plugged on Sony’s site.

Additionally, there was some speculation a few days back on DP Review forums that tossed out these model number, along with price and sensor specs:

The poster nailed the A850 sensor and is probably pretty close on price as well.  Having pulled these model names of thin air is a pretty lucky guess – or maybe he knows something we don’t…?