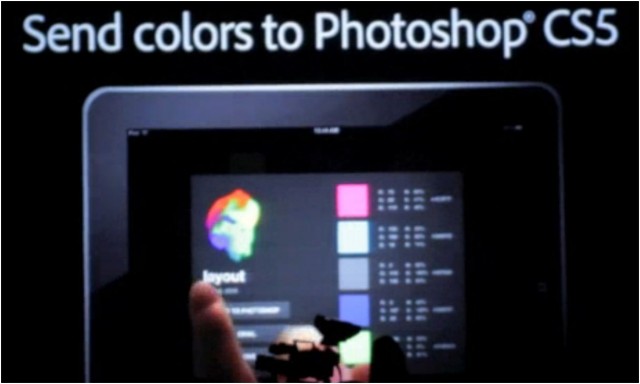 Last week, we saw what the future possibilities are for Photoshop on the iPad and other tablet devices when it comes to actually working with layers.  Now that I’m back from Photoshop World and have had some sleep, I’m getting to some of the other exciting stuff that I saw there.

In yet another segment of the Photoshop World 2011 Keynote, John Loiacono introduced a teaser trailer of a new “color mixing” feature that will be coming to Photoshop for the iPad in the “very very near term,” as he put it.

Check out the video below.

Personally, I think Adobe may be onto something for tablet users with these in-app purchases (the Photoshop Express app itself is free).  People who are actually going to use Photoshop Express on the iPad are going to find it easy to shell out $4 for some killer noise reduction add-ons.  Likewise, the ability to work on drafts in the field with the iPad and then wirelessly sync your colors/settings to your big boy Photoshop CS5 program will easily garner another $5 (or whatever the nominal price may be) out of users’ pockets.

And, if the iPad Photoshop with Layers thing turns out to be another in-app purchase later on down the road, I know plenty of photographers who would shell out $10 for something with that functionality.  While it may not be where the final image is constructed, the ability to shoot a few frames and demonstrate the concept of the final product in the field and on the fly is most likely where the iPad Photoshop edition will ultimately shine.

Whether it turns out to be in-app add-ons or a new, improved Photoshop App, we should all be seeing the Color Mixing feature coming soon to an iPad near you.