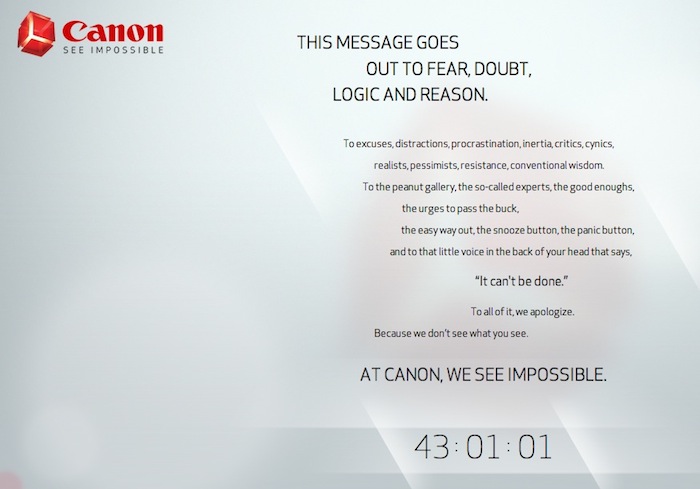 Canon has launched a teaser website that contains a very bold, albeit cryptic, message and a countdown clock set to expire on Tuesday, October 7 at 9AM ET.

This is such a big deal to Canon that it took out an ad in the New York Times to convey the following message:

THIS MESSAGE GOES
OUT TO FEAR, DOUBT,
LOGIC AND REASON.
To excuses, distractions, procrastination, inertia, critics, cynics,
realists, pessimists, resistance, conventional wisdom.
To the peanut gallery, the so-called experts, the good enoughs,
the urges to pass the buck,
the easy way out, the snooze button, the panic button,
and to that little voice in the back of your head that says,
“It can’t be done.”
To all of it, we apologize.
Because we don’t see what you see.
AT CANON, WE SEE IMPOSSIBLE

Canon is involved in many industries, including the very boring business printer and copier market. So, before we get too excited about a new mirrorless camera, realize that this could be something totally unrelated to photography but still be a big deal for another market.

It’s also part of a big ad in the New York Times, which suggests to me that it may very well be something new and groundbreaking for the consumer market – rather than a chance of a high-end, high-resolution DSLR.

The only hint of anything is the small red box that is expanding with a light source within that appears in the top left corner of the page. In the NYT ad, it appears to take up the entire facing page to the teaser message shown on the website. I don’t know if that’s a new logo or there is some other product meaning to which it will relate.

Fire away with your speculations in the comments below.

[UPDATE] The logo resembles Canon’s ImageRUNNER Advance logo as pointed out by Shaul in the comments. Compare the logos below.

So . . . yeah . . . it’s probably a big, ugly business printer/copier, which I’m sure excites an office manager somewhere; however, we photographers can probably exhale more disappointment and sleep in this Tuesday. 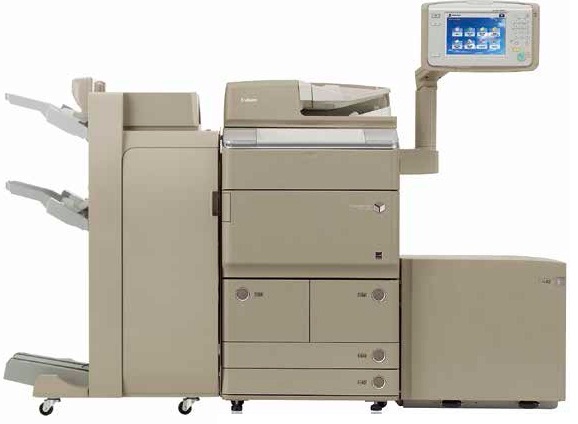