For the dog lovers out there, you’ve got to be able to appreciate some of the expressions your dog makes and just how much dog photos make you smile. I consider my friend Geoff Fox, the meteorologist over at WNTH-TV to be an expert on the subject. Here are some tips from Geoff that I’ve learned and some tips that I’ve incorporated in from my own experience. 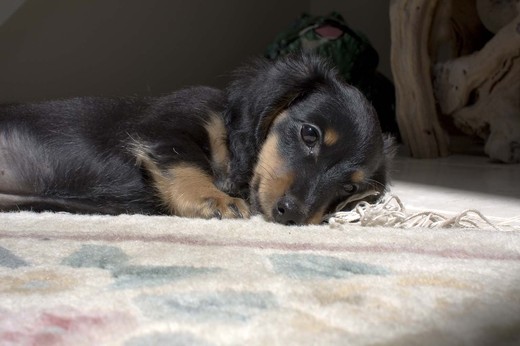 Get Low (To Their Perspective of the World)

Geoff’s advice is simple: shoot wide, shoot low. Many people shoot photos of their dogs while standing and pointing the camera down at them. Getting down low allows for most of the dog’s personality to come out in the pictures. The first photo in this post was taken by me. To achieve such a shot, I placed my 5D Mk II down on the floor, switched into Live View and shot in continuous shooting mode at a high ISO (between 800 or 1600) to ensure that the shots were captured perfectly. Using Live View, I was able to manually focus on the dog’s face and get the smile seen in the picture. It was taken with a 50mm F1.8 lens: more on this in a little while.

Geoff got down low to get the above shot of Roxie, his daughter’s new puppy. Taking the shot from above would’ve made it look like the puppy was dead: dead puppies aren’t cute. I often say turn off auto focus. In the case of both of my photos, manual focus was used because the dogs weren’t moving much. For that purpose it worked fine. A puppy or more energetic dog will be doing everything from chasing their tail to running around exploring their environment. For dogs that are on the move, switch your camera/lens into auto focus and make sure that you select the specific points where you’d like to say focused. 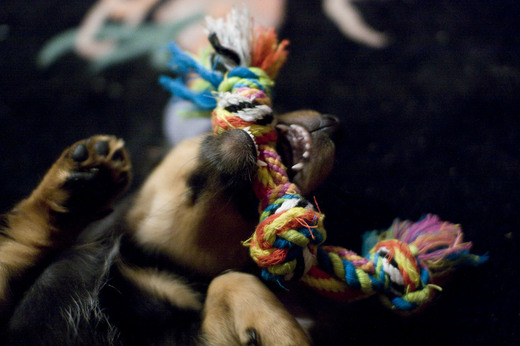 Be Patient With the Dog

Getting better and better photos of your dog takes time and requires reading into their body language. It requires persistence, and sometimes a larger memory card. They aren’t humans, so you can’t tell them what to do and expect them to comply. You’ll just have to wait until that moment comes. This will require looking through your viewfinder for long periods of time until you get exactly what you want. It can also help to shoot at faster shutter speeds. In my picture of the dog in his owner’s arms, his owner tried to get the dog to look at the camera. After he gave up, I just waited for the pooch to look in and then released the shutter.

Use a Wide Lens and Get Up Close

Shooting wide gives means that you need to get up close and personal to the dog: or at least make your viewer feel that way through pictures. In photojournalism, you’re taught that emotions are a key element to be photographed. Dogs and other animals have emotions: and capturing these create more powerful images.

Try this: lay on your back and point the camera up. Wait until your dog comes close and then shoot. Perhaps you’ll get a shot of the dog as its muzzle is sniffing the lens.

How do you shoot photos of your dogs? Let us know in the comments below.