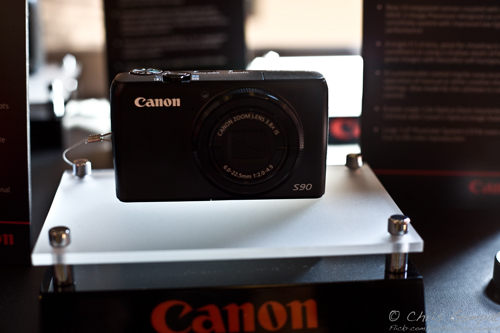 The Canon S90 is a new tempting point-and-shoot even for a pro shooter like myself (as well as other journalists.) The camera was announced today by Canon during a press event at the Museum of Natural History today in NYC. This camera is targeted towards professionals and enthusiasts that want a compact camera of some sort that can deliver better image quality than most of the other point-and-shoots out there. Granted, the camera seems to be able to deliver so far on the promise. 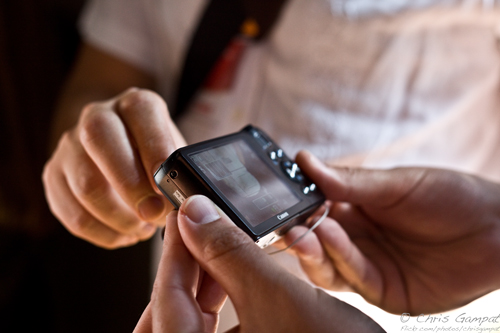 This camera is gorgeous and the layout of the button system can be a bit confusing at first but the camera has a very easy learning curve. It has the dial wheel which seems to be a standard feature on all of the more advanced point-and-shoots on top of all of the other controls like ISO, shutter delay, display, menu, etc. What really makes it different is the programmable wheel around the lens. Canon has done this with their camcorders before and now it seems to have come to the revamped “S” series of cameras. It can control my favorite aspect of this camera- a wide aperture of F2.0! For all the normal folks out there, F2.0 means that all your low-light events and parties will be captured much easier and prettier without the need of a flash. 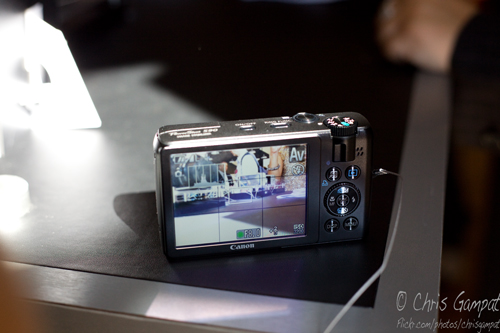 Besides the wide aperture the S90 has (according to the release):

Because Canon is using less megapixels on the sensor, it should deliver cleaner images. Add onto that the post-production potential presented when shooting RAW and you’ve got yourself a camera that you may want to get your hands on. Be warned though that even with a DIGIC 4 processor it slows down more than I’d like it to while shooting RAW images. Further note that the camera does not shoot HD video at all. I wasn’t allowed to snag sample shots as the display units were pre-production models.

One of the reps told me that the screen is around 230k resolution, which isn’t extremely high but is more than good enough for a point-and-shoot. You only really need higher resolution than that if you’ve got a touchscreen or a DSLR like my 5D Mk II.

We should be seeing the Canon S90 in stores this October for an estimated price of $429.99. Personally, I’m tempted to go out and get one myself. One of the Gizmodo guys told me that the S50 was his favorite camera a while back and he’s excited to see the return of this line of cameras. It would be very interesting to see how this stacks up against the Micro 4/3rds line of cameras like the Panasonic GH-1 and the Olympus E-P1.

A full review will be coming sooner or later so stay tuned for that.