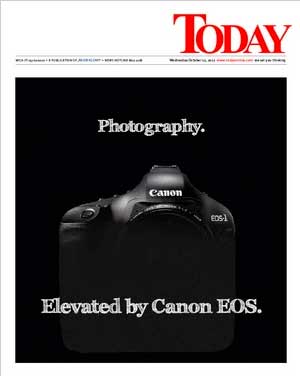 The rumormill has exploded over the past week or so with reports of new DSLR models coming from both Nikon and Canon.  The latest rumors suggest a high level of confidence in Canon’s release of a new DSLR on Tuesday, October 18.

Canon Rumors says it is 99% certain that Canon will be dropping a new DSLR on the scene next Tuesday.  The report goes on to say that the most likely candidate is a new Canon 1-Series camera.

In further corroboration of these rumors, Northlight Images (see the 10/12 report) is reporting that Canon Singapore has scheduled a product announcement for October 18.  It was also noted that the Today newspaper in Singapore featured significant Canon advertising (see top image).

Rumored specifications for a 1D Mark V or 1Ds Mark IV are summed up as follows:

12-14 frames per second seems overly ambitious for moving the mirror and tracking focus.  Additionally, I don’t see a 1Ds camera backing down to 18MP or lower.  And, these specs would mean the end of the APS-H format if it were for a 1D Mark V.  Both scenarios seem rather odd, so take the spec list with a healthy dose of salt.

My own speculation leans more toward a 1Ds Mark IV at a higher resolution than its predecessor.  And, hopefully, some of that built-in wireless radio trigger technology for remote flash and cameras.