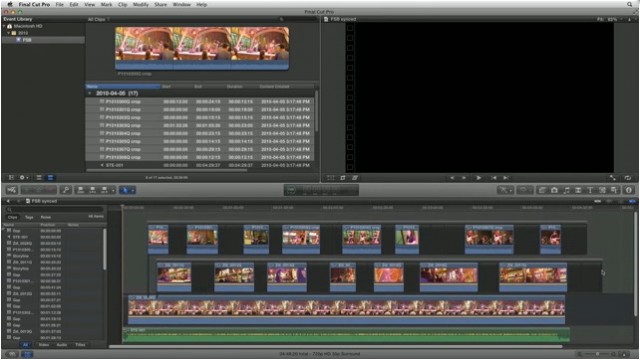 Singular Software has released a beta version of Plural Eyes for Final Cut Pro X.  While FCP X offers the ability to automatically sync audio and video clips natively, it still comes up quite short for all but the simplest of setups.  Multi-cam is next to impossible with FCP X; however, the new Plural Eyes beta release gives a glimmer of hope for editing basic multi-cam projects in FCP X by syncing multi-cam footage.  Likewise, syncing multiple takes to a single audio clip is a challenge in FCP X, but is something that the new Plural Eyes beta shreds through easily.

For multi-cam footage though, anything more than a handful of cuts still demands a true multi-cam editing option – as in FCP 7, Edius 6 or Premiere CS5.5.  I’ve been using FCP X quite a bit since it was released; however, I won’t touch a multi-cam project with it.  Now that Plural Eyes has this version out, I’ll probably try it out just to see how much I can get away with.  I’ve been a big fan of Plural Eyes on other platforms.

Interestingly, the Singular Software guys recommend using secondary storylines to keep the camera footage organized when editing multicam footage in FCP X.  I think this is about as good as we can expect out of the current state of FCP X; however, it’s also very telling about the limitations of the software – since we’re effectively forcing it to look and work like a track-based system.

Apple has promised that multi-cam is coming for FCP X.  I’m curious to see how they pull this off based on the current structure of FCP X.  I don’t see the Apple way of going multi-cam as a hacked-together series of connected clips that you cut between for a couple of reasons.  First, there’s really no way to make that work cleanly.  And second, it gives one clip priority over all the other clips that are forced as connected clips.  I could see it working in some manner similar to the way FCP X does Audition…  But that’s for another day.

Right now, the latest Plural Eyes beta is the about the only game in town for even thinking about multi-cam or multi-clip sync on FCP X.  Check it out over at Singular Software’s website – it’s a free beta!