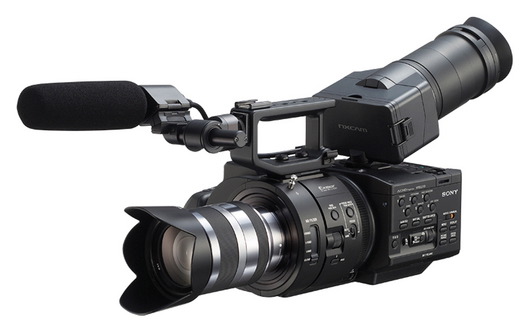 First, a rant.  Then, the footage.

One thing I admire about Sony’s camera division is the willingness to step out on the edge with product features and placement in the market.  Sony was the first to give us fast, phase-detect live view on DSLRs with the A300 and A350.  It wasn’t the perfect implementation, but it was better than what anyone else was doing.  And frankly, what Sony does now with the translucent mirror tech is pretty incredible.  The A77‘s live view AF is unmatched.

When Canon and everybody else came along with a DSLR that shoots video, we all expected Canon or someone to hit the mark with a large-sensor camcorder.  Sony (and Panasonic) were the first to do so by a mile.  The Sony NEX-VG10 maybe wasn’t a perfect camcorder; however, Sony was willing to stick its neck out and give us a taste of what we were all asking for.

The Sony stepped up with the FS100 last year.  Again, not a perfect camera, but it had lots of stuff that shooters had been begging for (dual XLRs with phantom power, on-board audio monitoring, 1080/60p, clean HDMI-out, etc.).  The biggest thing the FS100 had going for it was the $5000 price tag that stands at 1/3 the cost of the C300, which Canon took over 3 years to deliver from the intro of the 5D Mark II.

Sony is still working out the bugs on the FS100, but a firmware update due out later this month should make it a lot more functional (8x crop focus assist, camera profiles via SD card, etc.).  The fact remains that the FS100 stands alone as the only sub-$5k camcorder with a Super35 sensor – a full year after its release.

And now, Sony steps up to the plate again with a swing for the fences with the NEX-FS700.  Out of the box, it’s a 1080p camcorder; however, Sony has plans to upgrade it to 4K capture with the existing hardware inside the shell.  More impressive to me, however, is the frame rates the FS700 delivers.

It seems to me like manufacturers are afraid to show what their tech can do – or they don’t want to push the envelope too far too fast.  It’s like – “lets sit on this feature set for x-months/years and see how far we can milk the market, then we’ll do a major upgrade.”

As big of an electronics behemoth that is Sony, it’s somewhat surprising to see it stepping out on a limb with what customers are seeking – with a sub-$10k camera that shoots 240fps at full 1080p and planned upgrade path to 4K resolution.

It’s not like no one asked Canon for any of these features.  We’re pushing the four year mark (come September) and Canon still hasn’t delivered a 1080/60p camera – even for $16,000.

If Canon and the rest don’t want to play in the sub-$10k market, it looks like Sony is the lone ranger to deliver camera after camera with proper pro-video features.

That said, feast your eyes on the first FS700 footage courtesy of Sony Professional on Vimeo.