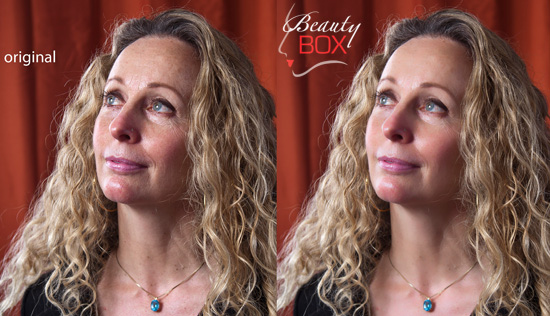 “Love this software and it’s very simple to use”, said Rudi Schwab, director and cinematographer of the high-profile ad campaigns for Nexxus ‘Endless Style’ and Aveda Cosmetics. “You simply drag the Beauty Box effect onto a clip in the timeline, open up the Effects tab in the Viewer Window, click on Analyze Frame, and adjust the smoothing slider to your liking. I was amazed at how well Beauty Box works on skin tones. It looks as good as sitting in a $1000 per hour Flame suite. That’s critical when you’re doing commercials for skin care products.”

Since 2008, Beauty Box Video has been a critical tool for dealing with skin and makeup problems that HD and 4K reveal, but were not apparent in SD. Beauty Box gives actors or models an incredible makeover in post-production, using state-of-the-art face detection and smoothing algorithms that preserve important details and the natural skin texture. Its version 2.0 algorithm has been redeveloped to take advantage of the new OpenCL technology, which speeds up Beauty Box regardless of host application, operating system, or make of video card.

“SCRATCH and SCRATCH Lab have well-earned reputations as the most flexible DI and Dailies software in the industry, supporting standard interfaces such as OpenFX, XML and HTML”, said Steve Bannerman, VP of Marketing at ASSIMILATE. “We’re delighted to see Beauty Box, another best in class technology, join the prestigious list of OFX plug-ins that support SCRATCH and Lab. Now, our artists have the creative advantage of an incredibly powerful skin retouching tool at their fingertips, without ever having to leave the SCRATCH environment.”

Here is a rundown of the great new features:

·    ASSIMILATE SCRATCH and Sony Vegas Support: With this release we support a wide range of users from high-end finishing and advanced dailies artists to professional videographers. Other OpenFX Applications will be officially supported soon.
·    Fast Rendering: A complete rewrite of the skin-smoothing algorithm means Beauty Box renders quickly on ATI and NVIDIA cards.
·    Used by Hollywood: This best of class software for skin and makeup problems is used by studios around the world for feature films, television and commercials.
·    Shine Removal: Get rid of hot spots caused by shiny skin and bright lights! This feature dramatically reduces the effect of poor lighting conditions.
·    Better Masking: The skintone recognition algorithm has been redesigned for a better automatic masking process.
·    Award Winning: VideoMaker magazine named Beauty Box the Plugin of the Year, and it received multiple best of NAB awards when it was released in 2010.

Beauty Box Video 2.0 for OpenFX is regularly priced at $199 USD, but will be on sale for $149 USD until July 15th, 2012. For Sony Vegas Pro and Movie Studio users a very special deal with Sony allows us to offer it for only $99 for a limited time for those applications.