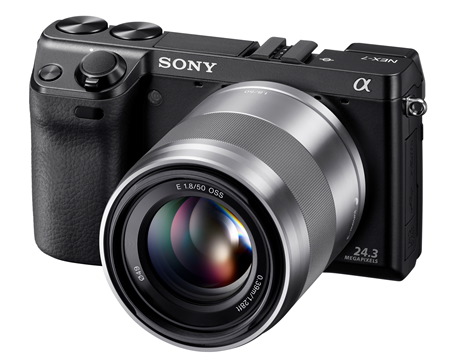 Sony Alpha Rumors has word that a Sony NEX-6 mirrorless camera will arrive next month in time for Photokina 2012 as a “mini NEX-7”, complete with an integrated viewfinder and a lower price.  This camera will purportedly be situated between the NEX-7 and the NEX-5F (update: it’s apparently the NEX-5R) (the rumored replacement to the excellent NEX-5N).

Sony’s line of NEX mirrorless cameras seems to be the market leaders at the moment.  A new casual NEX-5F and more serious NEX-6 could mean that Canon will have its hands full with competition for the Canon EOS M, which is due for an October 2012 release.

While the Canon EOS M has a lot going for it, the more serious crowd of photographers have lamented over the absence of a proper viewfinder and the heavy touchscreen control input.  Make no mistake though, the EOS M is a consumer-centric camera aimed at tempting the point and shoot user to step up for better image quality.  It’s not quite suited to go head-to-head against the Sony NEX-7 or rumored NEX-6.

I expect Canon to release a more serious EOS M model in the future (and maybe we’ll get a tease at Photokina 2012).  For now, however, the EOS M will sell like hotcakes to the consumer and not-so-picky enthusiast crowds and it looks like Sony will continue to own the more serious (and lower volume) mirrorless camera market (with deference to Fuji and Leica well on up the chain).