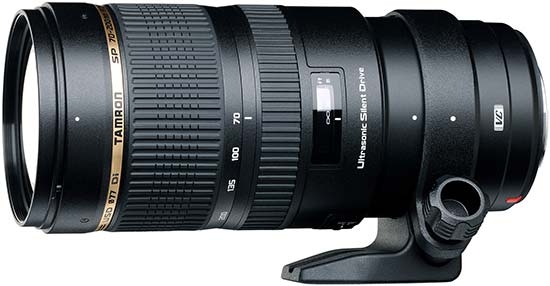 Tamron has announced a new 70-200mm f/2.8 lens.  The new lens will be available for Canon, Nikon and Sony Alpha mounts later this year.

The Canon and Nikon mount version of the lens will features Tamron’s Vibration Compensation, while the Sony model will not due to the presence of Sony’s sensor-based SteadyShot image stabilization system.  As such, the Sony models is designated as the Tamron SP 70-200mm F/2.8 Di USD lens.

Pricing for the new lens has not yet been announced.  However, I would expect this lens to be priced in the $1500-$2000 range.  The current non-VC version is quite the bargain at $769 right now.

September 13, 2012, 4PM JST, Saitama, Japan – Tamron Co., Ltd. (President and CEO: Morio Ono / Headquarters: Saitama City), a leading manufacturer of optical equipment, announced the development of a full-size, high-speed telephoto zoom lens equipped with VC (Vibration Compensation)2 image stabilization, and USD (Ultrasonic Silent Drive)3 that achieves leading-edge image quality while boasting the most compact design in its class. The SP 70-200mm F/2.8 Di VC USD will be available in Canon, Nikon and Sony[4] mounts. The lens is expected to ship by the end of 2012. Pricing information will be announced at a later date.

? New VC System (moving coil method)
Tamron’s original VC image stabilization mechanism utilized a moving magnet system whereby a heavy magnet was positioned near the moving VC lens element. In the new VC unit, the positions of the magnet and the coil are reversed, and because of this the VC optical lens element is attached to the coil. The new VC mechanism employs a moving coil mechanism with a lightweight coil, and the lighter coil reduces the load on the drive system. Thus, the lighter, more compact new VC unit contributes to the lens’s overall light weight and compact size. 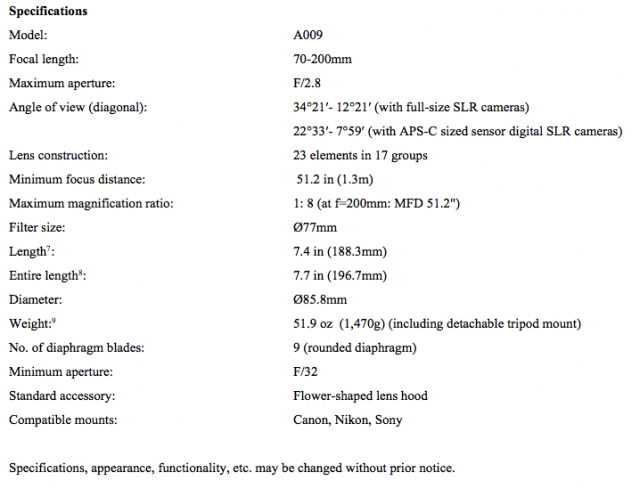 [1] For high-speed telephoto zoom lenses for full-size SLR cameras, equipped with VC image stabilization and USD. Current as of September 2012. (Source: Tamron)
[2] VC (Vibration Compensation) is Tamron’s proprietary image stabilization mechanism.
[3] USD (Ultrasonic Silent Drive) is Tamron’s proprietary ultrasonic motor drive.
[4] The Sony mount does not include VC, as Sony digital SLR bodies include image stabilization functionality. The Sony lens is designated as “SP 70-200mm F/2.8 Di USD”
[5] The XLD (Extra Low Dispersion) glass is made from specialized high-grade glass, which offers greater chromatic aberration correction properties than LD (Low Dispersion) elements.
[6] This rounded diaphragm retains a nearly circular shape even when taken two stops down from its fully open state.
[7] Length, entire length and weight values given are for the Nikon mount.
[8] Entire length is the distance between the tip of the lens and the tip of the protrusion.
[9] Length, entire length and weight values given are for the Nikon mount.
[10] Coupler system refers to a system that uses a shaft to harness the AF motor built into the camera body to operate the lens.