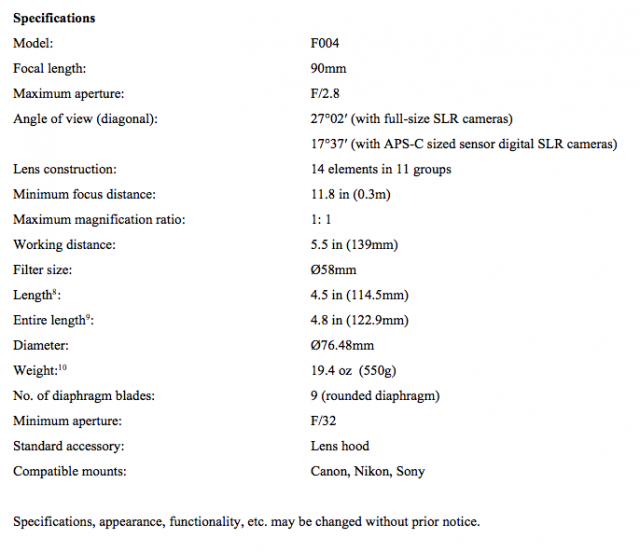 [1] VC (Vibration Compensation) is Tamron’s proprietary image stabilization mechanism.
[2] USD (Ultrasonic Silent Drive) is Tamron’s proprietary ultrasonic motor drive.
[3] The Sony mount does not include VC, as Sony digital SLR bodies include image stabilization functionality. The Sony lens is designated as “SP 70-200mm F/2.8 Di USD”
[4] This rounded diaphragm retains a nearly circular shape even when taken two stops down from its fully open state.
[5] The XLD (Extra Low Dispersion) glass is made from specialized high-grade glass, which offers greater chromatic aberration correction properties than LD (Low Dispersion) elements.
[6] The eBAND (Extended Bandwidth & Angular-Dependency) Coating is a new nanotechnology-based coating technique developed by Tamron to reduce unwanted reflection.
[7] From 3m, the benefits of VC (Vibration Compensation) gradually decrease as the focus distance becomes closer.
[8] Length, entire length and weight values given are for the Nikon mount.
[9] Entire length is the distance between the tip of the lens and the tip of the protrusion.
[10] Length, entire length and weight values given are for the Nikon mount.
[11] Coupler system refers to a system that uses a shaft to harness the AF motor built into the camera body to operate the lens.