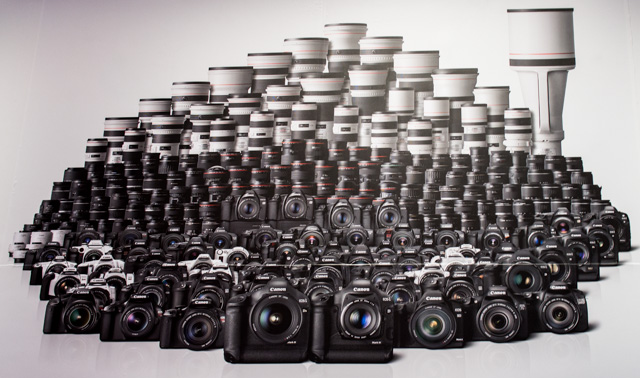 Canon remains number one among manufacturers in terms of volume of DSLR and interchangeable lens cameras. This takes into account the mirrorless camera market as well.

Of course, this is based on a Canon survey. I’m not sure what scope and details of that survey were; however, Canon feels good enough about the numbers to claim that it has delivered more DSLR and mirrorless cameras than Nikon, Sony or any other manufacturer.

Full bragging rights in the press release below.

In addition to interchangeable lenses, Canon also develops its own key components – the CMOS image sensors and image processors – employed in the company’s interchangeable-lens cameras, incorporating the most advanced of these technologies in its flagship EOS-1D series. By applying these technologies to other models as well, Canon has successfully created a powerful product lineup that effectively responds to the needs of a wide range of users, from professionals to entry-level users, which has enabled the company to maintain the top global share.

In 2003, the dawn of Digital SLR cameras, Canon introduced its breakthrough EOS Digital Rebel, a compact and lightweight user-friendly camera that set the stage for growth in the Digital SLR market while, at the same time, captured the top share of the global market. Since that time, Canon, in the company’s ongoing pursuit of high image quality, has launched a number of models targeting advanced-amateur users that offer among the highest levels of performance for their class, including the EOS 5D series, which paved the way for Digital SLR video recording.

In 2012, Canon celebrated the 25th anniversary of the introduction of the EOS camera system and marked its 10th consecutive year as the market’s world leader. During the year, Canon launched the compact-system EOS M, aimed at expanding the company’s entry-level user base, along with the EOS 6D, the world’s smallest and lightest*2Digital SLR camera equipped with a 35mm full-frame CMOS sensor, which contributed to the growth of the advanced-amateur user segment.

This year, Canon introduced the EOS Rebel SL1, the world’s smallest and lightest*2 Digital SLR camera equipped with an APS-C-size sensor, bolstering its product lineup with a model befitting the industry’s top brand while targeting its 11th straight year as the world’s market leader.

With a history of producing cameras that dates back to the company’s founding in 1937, Canon will continue refining its diverse imaging technologies based on its core optical technologies, striving to produce exceptional and reliable lenses and cameras that cater to the varying needs of photographers—from first-time users to advanced amateurs and professionals—while contributing to expanding the photographic and video imaging culture.

*1 Based on a survey by Canon.