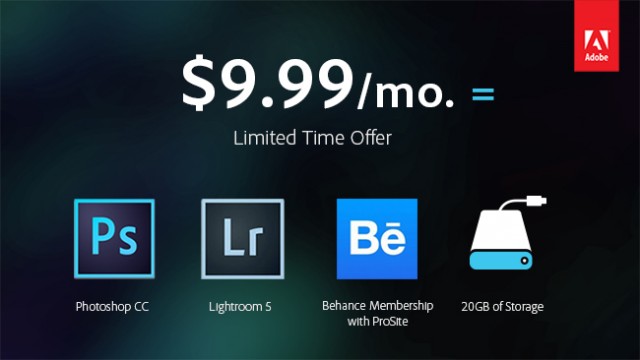 One of the biggest criticisms since Adobe killed perpetual licenses and forced Creative Cloud memberships on users who want access to future versions of Photoshop has been the price. The full Creative Cloud subscription that includes all the apps runs $50/mo. Single apps, like Photoshop CC, run $20/mo.

Jimmy Beltz and I discussed this very issue during a live cast shortly after the launch of Creative Cloud. I believe it was Jimmy that came up with the suggestion of offering Photoshop CC and Lightroom for a combined price of $10/mo.

Well, that is just what Adobe has done.

Today at Photoshop World, Adobe announced that customers who own a previous version of Photoshop or Photoshop Extended, version CS3 or later (CS3.x, CS4, CS5.x, or CS6) are eligible for the “Photoshop photography program” through Creative Cloud.

There are a few catches though, which you’ve probably already picked up on.

First, you have to have a valid license of Photoshop CS3 or later. Second, you have to commit to one-year terms. Third, it is only available until December 31, 2013.

If you cancel later and want to join back up, you have to pay the full rate.

This price is not a special introductory price for your first year only; it is the standard price for this level of membership. But if you cancel your membership in the future, you will not be able to re-join at this special price. -Adobe CC FAQ

What about customers who don’t have a Photoshop CS3 or later license? (For example, Photoshop Elements users who want to step up to a more serious offering…?)

It appears that there is no Photoshop photography program other than this one. It’s not like you can get Photoshop and Lightroom at a non-discounted rate like $20/mo. combined cost.

No. It appears that if you do not have a CS3 or later license as a past customer, then you have to pay the standard $20/mo per app. That’s $20/mo for Photoshop and $20/mo for Lightroom.

Frankly, I see this as less of Adobe taking care of photographers and more as a pacifier to those who were part of the vocal outcry when Creative Cloud killed perpetual licenses earlier this year. If this move proves anything, it is that Adobe is entrenched in the Creative Cloud and shows no signs of bringing perpetual licenses back to photographers or other creative pros.

$10 per month is a deal. It’s just not one everyone can have. And if you want it, you better get it now before it’s gone.