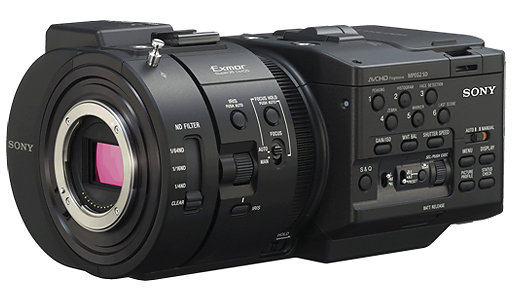 One thing that I think is coming very soon is 120fps in HD for DSLRs and mirrorless cameras. The question is: Who does it first?

We’ve got several high-end cameras that give us these frame rates (e.g., RED, Sony’s FS700 shown above, etc.). And then, there are several more affordable cameras that shoot 120 fps at 720p, including the GoPro Hero 3+, Sony HDR-AS30V and the iPhone 5s. That’s right, Apple put this feature in a phone before Canon, Nikon or Sony managed to put it in a $2000 camera that is known and expected to produce stunning image quality. There have also been a few point and shoot cameras that offer 120fps at 720p (e.g., the Panasonic Lumix ZS30).

So what’s the big deal about the 120fps frame rate?

This frame rate allows the footage to be conformed to typical video playback speeds of 24fps or 30fps for either 5x slow motion or 4x slow motion, respectively, with a very smooth effect. Lots of cameras now offer 60fps capture at either 720p or 1080p, which provides about 1/2 speed playback, but fails to deliver the dramatic punch that 120fps is capable of delivering. Can it be overused? Of course, but we won’t get into that here.

I will note, however, that I have seen several 120fps videos from the iPhone 5s in various social media platforms used very well. For instance, I’ve mentioned before that I do CrossFit and it’s very big on technique for Olympic weightlifting movements. Since the iPhone 5s release, I have seen plenty of slow-motion videos demonstrating certain lifts and providing insight on technique on Instagram.

And, it’s so easy to use, which is another conversation altogether. If you do any kind of sports though, the iPhone 5s just became a cheap camera to provide instant feedback on technique. You would think those guys at Apple knew what they were doing…

Our HDSLR upgrades are now becoming very incremental and I think 120fps is probably the next headphone jack in terms of feature sets. We see little things like headphone jacks trickle down from high-end models when they are no longer the thing that separates the pro models from the prosumer models. Of course, at the rate Canon is moving, we can expect 120fps in a prosumer model sometime after the year 2023…

Since we’ve already eliminated Canon as one to bring about any groundbreaking feature in a prosumer model, we’re left to wonder about Nikon, Sony, Panasonic, Olympus and Pentax. Out of this bunch, I would expect it to come from Sony or Panasonic first. Both companies have a strong set of video features in their existing product lines, and both companies have a history of dedicated video products. That said, I’m leaning toward Sony to be the first out of the gate because Sony has been pressing forward hard and fast since it entered the DSLR market.

I want 120fps in my next DSLR. I don’t want to have to drop $5k on it either. If Apple can put it in a phone that fits in my pocket and costs $600 (or $200 subsidized), then surely an actual camera manufacturer can do that in a camera that’s supposed to produce highly quality imagery for $2000.