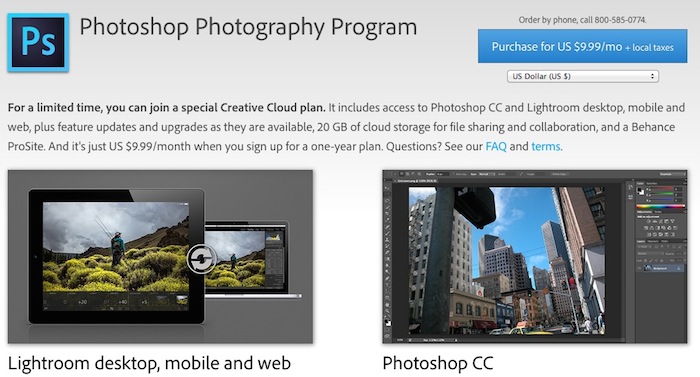 Adobe has extended its Photoshop and Lightroom subscription deal for $9.99 through June 17, 2014. Previously, the Photoshop Photography Program was set to expire on May 31, 2014.

At this point, it really comes as no surprise that Adobe has extended the deal. It has continually extended the deal since it first offered the Creative Cloud subscription package tailored to photographers back in September 2013.

So, why not extend through the end of the month as has been the case in recent deals?

Well, Adobe is set to launch the next iteration of Creative Cloud on June 18, 2014, which is the day after this deal ends. I hope that Adobe simply makes this a permanent price on the Photoshop Photography Program as part of the June 18 announcements and we don’t have to continue to follow these “sales” for the rest of time.

Frankly, I think it is only fair to offer the package on a permanent basis rather than lock in early adopters. If not, what is Adobe supposed to tell photography newcomers as they get more serious about their hobby/passion/business?

“Sorry, but you weren’t into photography when the $9.99/mo deal was going on and you’ll just have to subscribe to everything for $50/mo or pay $20/mo for Photoshop and purchase Lightroom out-right”?

That wouldn’t be cool and would really cast a negative light on Adobe, which has been trying to dig itself out of a negativity hole with a certain crowd of photographers since the whole Creative Cloud exclusive thing started.

You can find out more about the Photoshop Photography Program here on Adobe’s website.