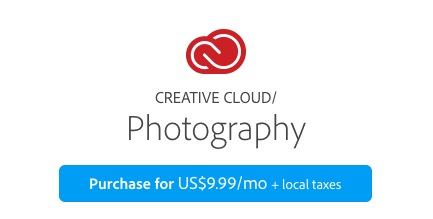 Adobe has finally stopped extending the “special deal” on its Photoshop Photography Plan and committed to making the subscription plan a permanent offering at only $9.99/mo.

The plan is now called Creative Cloud Photography and includes the same Photoshop CC plus Lightroom apps, along with a Behance account for storing and sharing your images. Of course, this includes the continuous updates to Photoshop CC and Lightroom, which we’ve seen a ton of new features added today, including a version of Lightroom mobile for the iPhone.

I know there are some who refuse to pay a subscription fee for Photoshop and Lightroom on principle; however, it’s getting harder for me rationally argue against it (admittedly, I’ve been a subscriber since the beginning of Creative Cloud) in spite of a few hiccups along the way.

It costs about the same as eating out a single meal at a fast food restaurant as it does to have a month of use for all of these apps. There’s a whole lot of value in there for $9.99 per month.

I’ve been using Lightroom mobile lately and I love it. Yeah, there are still some more features I want to see (even after today’s updates); however, just being able to flag and rate images on my iPad from anywhere is such a convenience.

You can find out more about the Creative Cloud Photography plan here on Adobe’s website.