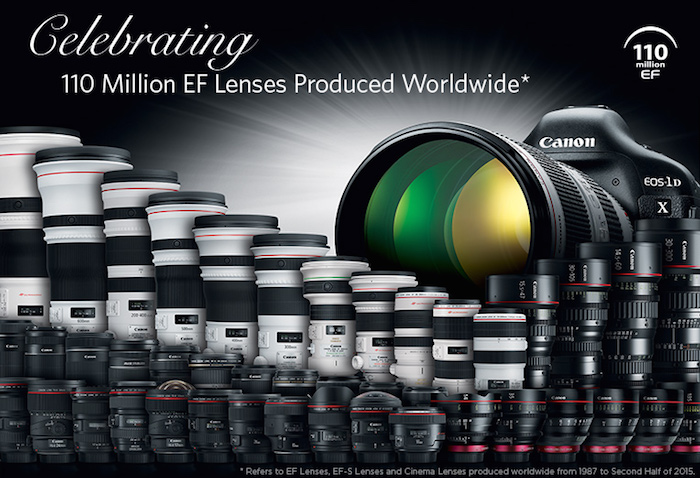 Canon began producing EF lenses for the Canon EOS system in 1987 and, by 1995, had produced 10 million lenses. Canon has reached each 10 million lens production mark faster than than last with the exception of a measurable decline for the last two milestones.

We know the digital camera market has been pumping its brakes over the past couple of years, so this isn’t necessarily unexpected. Cranking out 10 million lenses in 14 months still isn’t too shabby but it’s not the heyday Canon saw from 2008-12 during what I consider the “DSLR boom” in the digital imaging industry.

We’re seeing Canon’s DSLR market slow down but everything in the serious camera market is slowing down because fewer and fewer casual users care to have a DSLR, mirrorless or pocket camera with them. Smartphones are simply good enough cameras for most people.

Expect that trend to continue. Mirrorless cameras are not going to dominate in the imaging space the way DSLRs once did. Even if they overtake DSLRs in sales, the popularity of a bigger camera is never going to be what it was a few years ago.

Expect the next milestone from Canon to take even longer and that trend to continue until production plateaus and the decline in DSLR sales stabilizes. Or, maybe Canon will kickstart its lens sales a bit with a killer and affordable mirrorless camera.

Of course, to do that, Canon would have to cannibalize its own Rebel line, which is extremely popular and the bread and butter of its DSLR market share. And that’s something I think is very unlikely given the corporate culture we’ve seen from Canon in recent years.

One of my favorite quotes from Steve Jobs deals with this exact dilemma.

If you don’t cannibalize yourself, someone else will.

Canon has clearly missed the boat on the mirrorless market. While its Canon Rebel DSLR sales are still head and shoulders above everything else everyone else is making, the luster is starting to wear and brands like Sony, Panasonic and Fuji (among others) are starting to make a dent in Canon’s well-established entry-level kingdom.

Canon had the chance at the forefront to be a leader in mirrorless tech and establish a new generation of dominance. Now, it’s a slow-moving giant with a target on its back as serious cameras move toward a rather niche future.

Check out the historical breakdown of Canon lens production milestones below.

What do you think? Will Canon ever increase lens production volume to more than 10 million per year again? Will another manufacturer be able to achieve those numbers? Or, has the smartphone disrupted the digital camera market so much that it will become (and remain) a niche market before long?