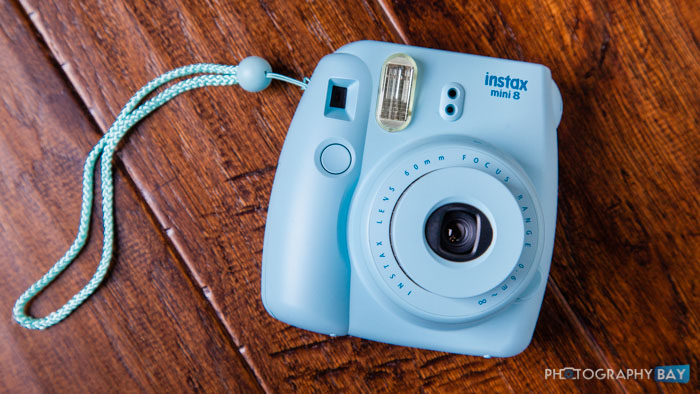 The Instax Mini 8 is one of the most popular cameras in the world and is part of the epic line of compact instant film cameras from Fujifilm. Although the Mini 8 is several years old, it is a perennial best seller for both casual and enthusiast shutterbugs.

As I write this review, Instax Mini film sits in all top 3 best-seller spots in Amazon’s Camera and Photo category. It was also the number one seller last holiday season. Three different Mini 8 color models reside in the top 10 of the Camera and Photo category. I suspect that if Amazon combined the different Mini 8 color options as a single product listing, it would push the camera into the top 5, if not the top 3 best sellers. 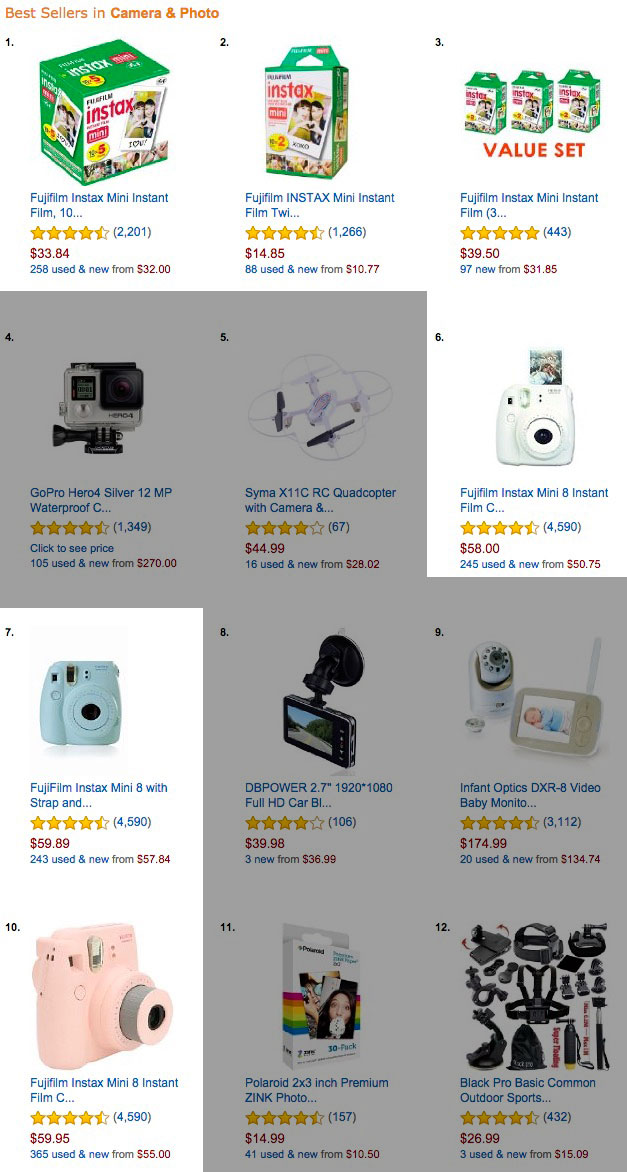 You have to scroll down near rank #20 to find a regular digital camera in the top seller list. And the first DSLR doesn’t show up until you get into the #80s (BTW, it’s the Nikon D3300).

There’s no need to beleaguer the point any further. Suffice it to say that the Fuji Instax series is the bees’ knees right now.

I’ll be honest though, I didn’t always think these Instax cameras were that great. I thought the film prices were too high and somewhat rolled my eyes at the resurgence of Instax cameras when they reemerged in the US back in 2010. For a while, I thought it was a hipster fad that would soon enough fade away.

Over the past couple years, I’ve come to acknowledge that my earlier judgment was wrong and I’ve bought a pair of Instax cameras for myself. (Read my Fuji Instax 210 wide format review.)

The short of it is that I love them – and so does everyone else I encounter. When I hand someone an Instax Mini print, I get more admiration and engagement with the print than I ever do by sharing my screen to show a preview of a shot with a digital camera or iPhone. 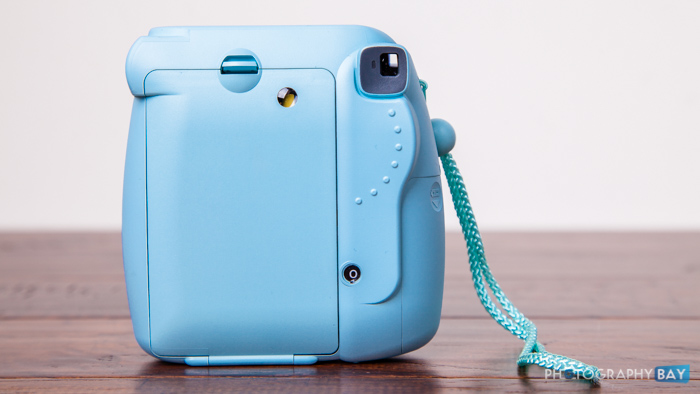 There is a magic to analog that is not yet gone in this digital world and the Fuji Instax Mini 8 is an affordable gateway to that analog drug. The Instax Mini 8 is readily available at $60 or less these days and comes in a variety of colors.

Film is loaded as a pack of 10 prints that measure 62 x 46mm, which is a little larger than a 645 medium format negative. Practically speaking, a print with the border is about the size of a credit card.

Packs of film have dropped in price over the years to the point where you can find a two-pack (or about 20 exposures) for less than $15. That averages out to about $0.75 per shot.

While that may sound pricey, you quickly find that you are more conservative with your shutter finger when you are shooting any kind of film. For me (and many others like me), it is well worth the experience.

As for the Mini 8 itself, the camera’s operation is one of the simplest out there, which is likely another reason that it is so universally well-regarded.

The camera is powered by a pair of AA batteries (included in the box too!), which serve to drive the motor for ejecting prints and charging the flash. The Mini 8’s lens is a two element lens with a f/12.7 max aperture. 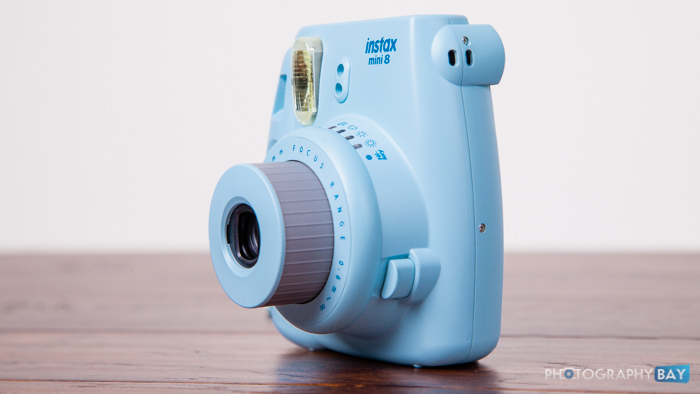 The camera’s built-in metering will offer an exposure suggestion via the LED light on the lens barrel. By turning the lens ring to the appropriate icon, you are adjusting the aperture between f/12.7 and f/32. The flash will always fire but the output level is adjusted automatically based on the camera’s metering of the scene. Flash recycle time can vary between 0.2s and 6s with new batteries and depending on the output.

These are hardly features and specs that you need to know in order to use the camera. However, I know how photo geeks like me roll and some of us just like to understand more about how our gear works . . . even if it is a $60 instant camera.

Shutter speed is fixed at 1/60s on the Mini 8. All Instax Mini film is currently rated at ISO 800 and is only available as color film. It would be great if Fuji would cook up some black and white film for the Instax cameras. I have a feeling that it would be a big hit.

The Instax Mini color film is far from boring though. The color is great and it is quite forgiving as instant film goes. One of the best things about all of the Instax film is the variety of different borders available. Even though you are locked to ISO 800 color film, changing up the film’s borders adds a lot to the overall character of the photo and the subjects within.

Of course, the plain white border film is the most popular. And the large area at the bottom of the frame gives you room to label with a Sharpie. 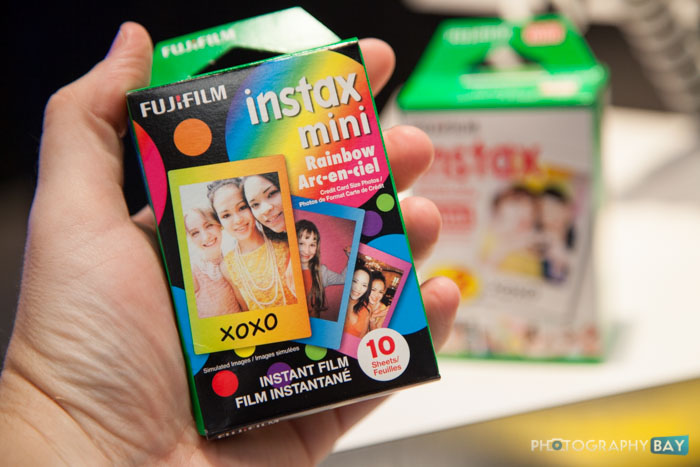 There is also Rainbow Instax film, which gives you a variety of rainbow-hued frames in each pack of 10 frames. If you dig around, you can find a variety of other film designs with polka dots and stained glass. You can even find Star Wars, Mickey Mouse, Pixar and Hello Kitty films. If you have kids or grandkids, chances are that you can find a type of print with some of their favorite things on them. 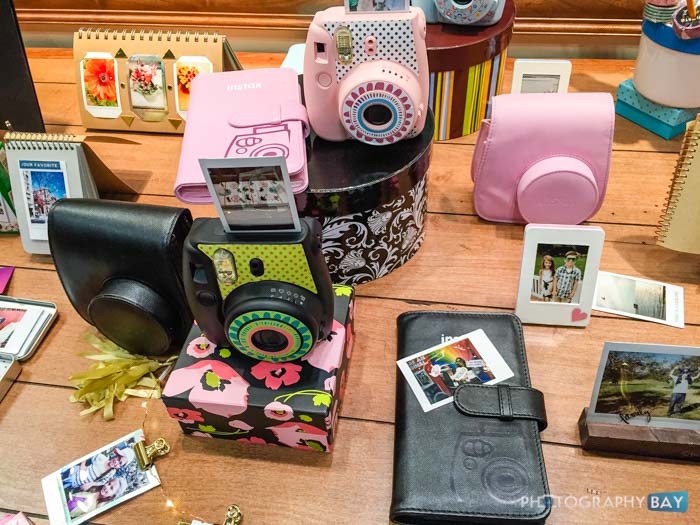 Along with films that have a variety of borders, there are a number of other accessories like camera cases that closely hug the Mini 8’s body and albums for your Instax Mini prints. You can also find custom Instax accessories on sites like Etsy. 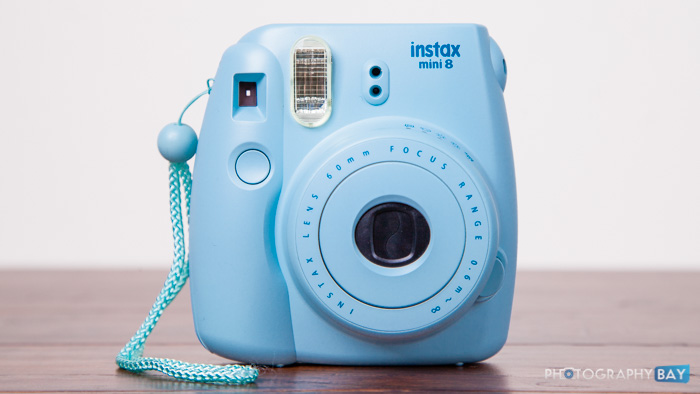 The Fujifilm Instax Mini 8 is well deserving of its current pop culture status and best-seller lists. Fuji has crafted the perfect mix of simplicity and value for making analog cool again and not just a passing fad. The growing Instax line (and especially the Mini 8) has won me over. If you’ve wondered about instant film and whether its worth a try, for $60 or less, the Mini 8 gives you zero excuses to find out for yourself.