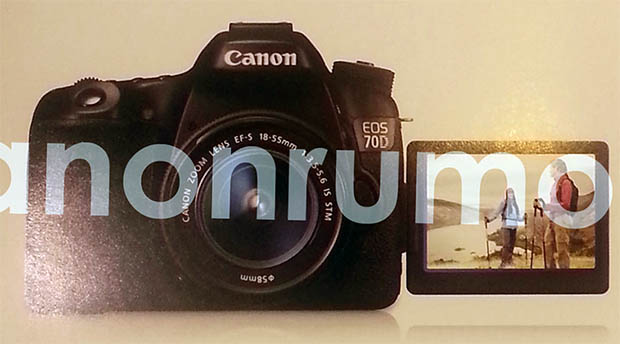 The Canon 70D has made its first unofficially official appearance in the form of a leaked advertisement acquired by Canon Rumors. The camera will feature a new 20.2MP APS-C CMOS sensor and a DIGIC 5+ processor.

Additionally, built-in WiFi will likely work the same as recent iterations in the Canon 6D (i.e., easy and usable). Notably, the 70D will feature a new Dual Pixel CMOS AF system, which should be 5x faster than previous-generation live view and movie mode AF. That’ll be a huge win for Canon if true, since Canon’s DSLRs have, to date, sucked in the live view AF department. END_OF_DOCUMENT_TOKEN_TO_BE_REPLACED

The latest rumors suggest that we could see the Canon 70D officially announced and replacing the 2.5 year old 60D in July 2013.

The 70D is supposedly in the final stages of testing and units are in the hands of some of Canon’s Explorers of Light. Additionally, Canon is rumored to be in the process of shooting commercials and ad campaigns for the 70D at various locations.

If you see one in the wild, send some photos our way.

Previously rumored specs point to an 18MP sensor and more robust build than the 60D. END_OF_DOCUMENT_TOKEN_TO_BE_REPLACED

The latest in a long line of rumors concerning the Canon 7D Mark II puts the camera’s delivery beyond this calendar year and into 2014. That would put the original Canon 7D (it was announced in Sept. 2009) well past the 4-year mark if/when the 7D Mark II is announced in 2014. Much longer and we’ll need to start looking into kindergarten programs for the 7D…

Additionally, the Canon 70D is supposedly the only other Canon DSLR that is going to arrive this year; however, there are rumors from “good sources” that put several new lenses coming in 2013. Could the EF 28-300mm and EF 100-400mm lenses be among those new offerings?

The Canon 70D was previously rumored to be announced next week on April 23. If that is, in fact, the case, we should expect to see lots more leaks and rumors in the next few days. However, confidence for that date is now waning a bit.

Still yet, that hasn’t stopped the rumor mill from generating a revised spec list of what we could/should see on the Canon 70D. END_OF_DOCUMENT_TOKEN_TO_BE_REPLACED

The latest rumors suggest that Canon has a new camera announcement coming on April 23, 2013. While no specific details have leaked out at this point, the Canon 70D seems to be a very likely candidate.

The 70D has been rumored to be coming for several months now. The timing is also right to replace the 2.5 year old Canon 60D. END_OF_DOCUMENT_TOKEN_TO_BE_REPLACED

While previous rumors pointed a March announcement of the Canon 70D, the new Rebel T5i and Rebel SL1 will apparently stand alone as the March Canon announcements. New rumors, however, point to an April announcement for the Canon 70D. END_OF_DOCUMENT_TOKEN_TO_BE_REPLACED

After yesterday’s word of a Canon press event on March 22, more detailed rumors now point to the smaller Canon DSLR being the EOS 100D.

According to the sources, two Canon EOS cameras will land next week on March 21/22 with one being this EOS 100D and no specific word on the other except that it won’t be the Canon 70D. Perhaps the other will be the next iteration of the EOS M? 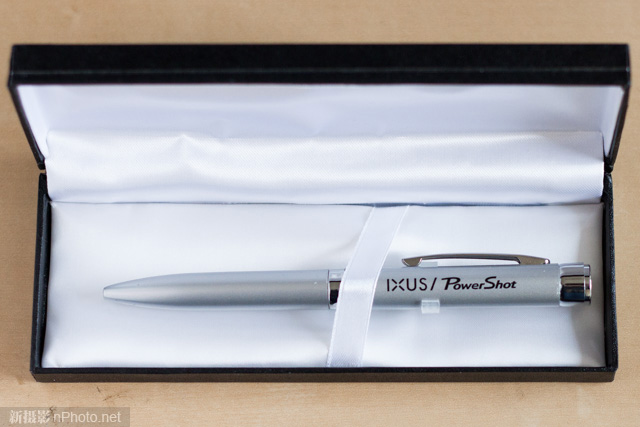 Canon has gone James Bond on us with its latest press invites for an event to take place on March 22. The invitation packages included a projector pen that was labeled with IXUS/PowerShot branding – no mention of EOS. END_OF_DOCUMENT_TOKEN_TO_BE_REPLACED

Canon has been rumored to be developing a new DSLR line that offers and even smaller body than the current Rebel series. Whether they will continue using the “Rebel” name for this smaller DSLR series is an unknown. Rumored specs for the new camera include the same APS-C 18MP sensor as found in the Canon Rebel T4i and EOS M (it’s really a great sensor with solid image quality coming out of it).

New rumors on the Canon 7D Mark II point to an integrated battery grip for vertical orientation shooting, which would point the APS-C camera squarely at pro shooters. Part of the speculated reasoning behind such a move is to make room for a bigger and more serious battery. END_OF_DOCUMENT_TOKEN_TO_BE_REPLACED