Canon Rumors calls this one a sure thing, saying that APS-H is alive and well.  The Canon 1D Mark IV (or Mark IIIn, or whatever-it’s-called) will keep the APS-H sensor format (i.e., 1.3x crop) and should be around the 15-megapixel range.  Let’s hope Canon loses the quirky autofocus issues along the way…

I’ve seen this date in the rumor mill a couple of times now, and it now appears to be in full swing with a press conference scheduled by Canon for March 25.  No details on which one it might be, but popular opinions suggest either a Rebel series update (EOS 500D) or a 1D Mark III update.

Fire away with your thoughts or derogatory remarks (just keep it clean) in the comments below.

A short but direct post on POTN, claims that a “Canon Rep” mentioned a new Rebel and Mark III would be coming to PMA 2009.

I don’t put a whole lot of stock in third hand reports of what camera reps say, but as we close in to PMA we should start hearing more chatter about a number of manufacturers’ new products.

In the mean time, you can follow the latest rumors on the new Canon Rebel XRi / 500D / (or whatever it’s called).  Also, Canon 1D Mark IIIn updates here. 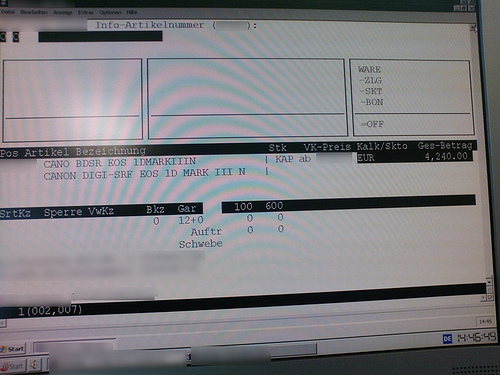 A screen shot of what purports to be an inventory system displaying the Canon 1D Mark IIIn surfaced on DPR forums today.

We’ve seen these shots before with Canon cameras prior to launch.  Next month, just prior to PMA 2009, will be prime time for Canon to release a 1D Mark IIIn as well.

Anyone else have thoughts, evidence or speculation on the Canon 1D Mark IIIn?