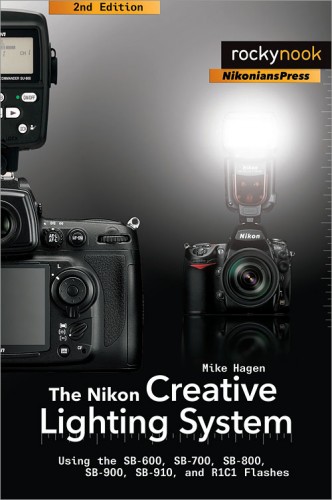 The Nikon Creative Lighting System, 2nd Edition is a new book from photography Mike Hagen that addresses “the common frustrations associated with flash, and specifically teaches how to use the SB-600, SB-700, SB-800, SB-900, SB-910, and R1C1 strobes. ”

The Nikon Creative Lighting System, 2nd Edition retails for $39.95; however, it is currently available for $25.27 on Amazon.com.

The Nikon SB-700 Speedlight looks to be sort of an SB-900 Jr., with the ability to use it as a Commander or Speedlight Remote in Nikon’s Creative Lighting System.   The SB-700 offers a number of other improvements over the SB-600, which make it appear to be a reasonable alternative to the Nikon SB-900.

The Nikon SB-700 should be available in November 2010 at an initial retail price of $329.95.  Check availability on Amazon.com.

There are plenty more details about this new Speedlight in the press release below. END_OF_DOCUMENT_TOKEN_TO_BE_REPLACED

The PocketWizard MiniTT1 and FlexTT5 wireless TTL system has been available for Canon DSLRs for quite awhile now, with Nikon compatible units on the calendar for some point in the future.  The future just got a little closer for Nikon shooters. END_OF_DOCUMENT_TOKEN_TO_BE_REPLACED

The Nikon D300s is a 12.3-megapixel DSLR that can also capture video at 720p resolution and 24 frames per second.  The D300s is a follow up to the D300 and serves as more of a refreshed version of the D300 as opposed to a totally new product.  It has most of same components and features as the D300 with a few new bells and whistles thrown in for good measure.

Since the recent announcement of the D3s, Nikon appears content in offering video capture at 720p for this generation of cameras.  All of the Nikon DSLRs that offer video only allow a maximum resolution capture of 720p at 24 fps.  Canon has stepped out of the box from its initial video limitations in the 5D Mark II by offering serious firmware updates to it (and promising more to come) and additional video options to its other new DSLRs like the Canon 7D, which offers 1080p HD video capture at 30fps, 25fps, and 24fps, as well as 720p HD video at 60fps and 50fps.  While Nikon has received much criticism on the video limitations of its recent DSLRs, it has shown no signs of stepping up the game in this generation of cameras.

That said, the Nikon D300s (and every other DSLR for that matter) is first and foremost a still image capture device.  Sure, video is relevant nowadays; however, performance for still image capture and quality is still our golden measuring stick.  With this in mind, let’s take a brief look at the key features and jump into the rest of this review. END_OF_DOCUMENT_TOKEN_TO_BE_REPLACED

Heads up!  Joe McNally and Bob Krist have put together what is sure to be a solid education tool for all you Nikon shooters out there who want to learn more about Nikon Creative Lighting System (CLS), which is one of the strong points of the Nikon DSLR system.  If it’s like everything else that Joe McNally does, this is probably 2.5 hours well spent. END_OF_DOCUMENT_TOKEN_TO_BE_REPLACED