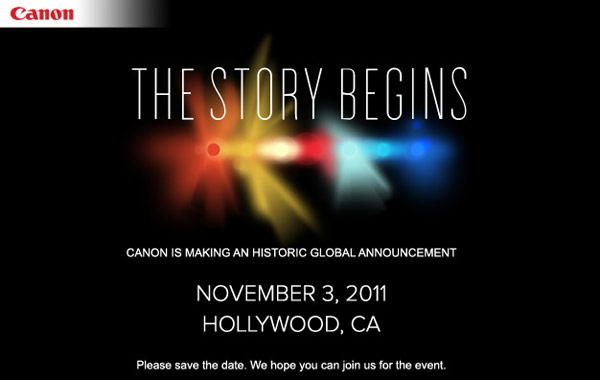 Now that the Canon 1D X has been announced, the big news item on the horizon for Canon is the Hollywood announcement scheduled for November 3.

I have no inside info, and the people who do have such info aren’t talking about it.  However, I’m willing to take a look at what we know and what the current market and Canon R&D conditions are primed for.

As a recap of what we actually know…

What’s clear is that Canon is stirring the pot and building some hype for this big Hollywood announcement.  Over the past 3-4 years we’ve seen both Canon and RED shake up the traditional filmmaking workflow by offering smaller cameras and lower prices.  To date, Canon and RED have been on different ends of the spectrum – with the RED One and RED EPIC actually replacing the traditional film cameras, while the Canon 5D Mark II, 7D and 1D Mark IV have supplemented the primary cameras, whether those were film or digital (see, e.g., Iron Man 2, Captain America, Red Tails, House, etc.).

In the mean time, other manufacturers have developed HDSLR-type cameras and 1080/24p is becoming a standard, must-have feature on any HDSLR.  That said, Canon still has a stronghold with the only cameras (5D Mark II and 1D X) that offer a 35mm full frame sensor capable of capturing 1920 x 1080 video.  (That should change soon when Sony and/or Nikon announce their next full frame DSLR, which would carry a Sony sensor, of course.)

Additionally, Sony and Panasonic have stepped up to the plate to offer larger sensors in video cameras, which started with the Panasonic AF100 and the consumer-esque Sony NEX-VG10 (followed a year later by the current NEX-VG20).  Later, Sony delivered the FS100, which features a NEX lens mount, along with solid pro video features like phantom-powered XLR inputs, audio monitoring, histogram, peaking, markers, uncompressed HDMI-out and so on.  With the feature set the FS100 offers, it is a bargain of a camera at under $5K.  Sony has expanded the Super 35 lineup with the F3, which is a higher-end tool than the FS100, but still a bargain for its feature set at around $13K.

With the current lay of the cinema camera land, RED occupies a stronghold on the Hollywood front with the powerful RED EPIC, which runs a little under $60K.  This is still a bargain in Hollywood when you consider the cost of film cameras, along with the film and processing expenses incurred for a feature.  And it shoots an incredible 5K image.

Looking at the camera landscape as it exists now, I can’t help but think Canon is going after RED’s market with its Nov. 3 camera.  And it seems like RED knows this too.

What I don’t think Canon can do with this much hype of a Hollywood announcement is to release Canon’s version of the Sony FS100 or even F3.  I think industry reaction to that would be resounding “meh.”  I don’t see a 1080p camera as “an historic global announcement.”

I think everyone who is really watching is looking for a 4K+ camera from Canon.  However, I think a 2K camera could shake things up if the price and feature set is appropriate – kind of like the ARRI Alexa, but without the 2nd-mortgage price point.  Frankly though, I think Canon needs to deliver a 4K camera to back up the big words “historic global announcement.”

We know Canon has stepped up its processing power as evidenced in the recent EOS-1D X camera, which features two Digic 5+ and one Digic 4 processors.  It can capture up to 14 frames per second of 18MP still images (i.e., bigger than a 5K video frame).  Canon also delivered several video features that its HDSLR user base had been asking for – like audio level adjustments during video capture, reduced moire problems, improved compression for more edit-friendly video and continuous video capture up to 29 mins. 59 sec.  It’s clear that Canon is listening and willing to pack in a solid feature set on a relatively affordable.

RED sells the EPIC like hotcakes at nearly $60K a pop with accessories.  So, I think Canon could deliver a reliable 4K camera at or around that price and come off looking pretty slick in Hollywood.  However, that leaves the camera out of reach for a lot of indie shooters and smaller studios.  Sure, there are rental houses, and that’s all good – but Canon wants to sell lots of cameras and the masses want to buy awesome and somewhat affordable cameras.

At some point (and we may still be a generation or two away from it), someone is going to deliver a sub-$10k camera that shoots 4K or higher-res video.  This is what a lot of indie shooters are waiting on.  And, whoever does it is going to have a leg up on the rest of the cine camera market.  While the 5D Mark II was the first step to democratizing filmmaking (which we’ve seen in the recently-announced feature ‘Act of Valor‘ that was shot on the camera and releases in theaters 2/12), the RED cameras have played a much bigger role in getting small projects to the big screen and are now rolling on the biggest film projects in the world.  And we know that resolution and image file quality (e.g., RAW video capture) are huge advantages for the RED cameras.

RED as a company has some big advantages over behemoths like Canon.  RED can maneuver more quickly to changing conditions and implement product changes on the fly.  RED is also well know for direct communication with its customers, as we’ve seen from Jim Jannard’s interaction with customers on the company’s forum.  However, RED has also faced small-company challenges, particularly with disappointments on delivery dates.  That said, many of the delays have also seen improved spec sheets as the camera benefited from ongoing R&D during the production cycle of an otherwise fixed model.

While Canon is not as nimble, it does have some advantages over RED in terms of manufacturing, R&D budget, and a massive patent catalog, to name but a few.  Canon also has a massive user-base from casual point and shoot users, enthusiast and pro still photographers, indie filmmakers and major Hollywood studios.  Obviously, this announcement seems to be geared more toward the higher end; however, a good portion of the rest of its installed user base is watching closely.

If this is a $50K or $30K or $20K camera that shoots 4K+ video, we’re all still going to pay close attention to what Canon has done with the camera.  And, of course, immediate comparisons to how it or RED cameras are better than the other will fill up forums and blogs around the web.

However, if Canon has found a way to build and price a 4K+ camera at a sub-$10K price point, it will absolutely live up to the hype of “an historic global announcement.”

Regardless of which camera Canon delivers, it will no doubt be a big deal.  And if Canon doesn’t hit that magic price point for everyman, it’s only a matter of time now until someone does.

In the end, the camera is just a tool.  As much as Photography Bay covers a gaggle of new gear and rumors of coming gear, it’s all just a tool for the photographers’ or cinematographers’ blank canvas or screen.  Without the talent behind the lens, it’s just an expensive brick.  I’m stoked to see what the new shiny toys from Canon and RED are going to be on Nov. 3, but I can almost guarantee you that I won’t be the first one in line to buy one.  In the mean time, I have a perfectly competent 5D that delivers solid photo and video performance.

All that said, I’m interested to hear your thoughts on what you are or aren’t looking for in a new cinema camera from Canon?