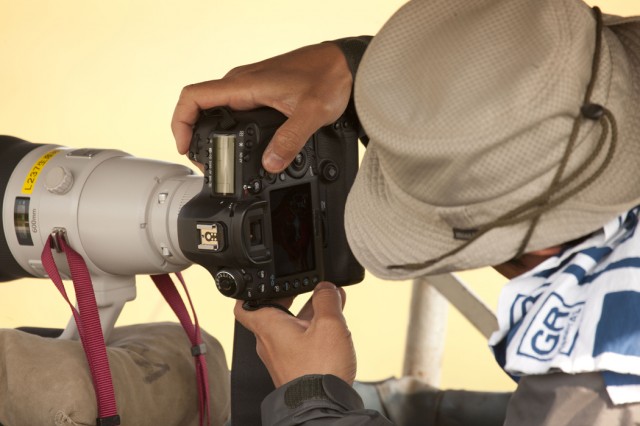 Is this the Canon 5D Mark III?

An unknown Canon camera appeared in Kenya this week, along with prototype versions of the Canon 200-400mm lens and Canon 600mm lens.  Lots of speculation has ensued as to whether this is the Canon 5D Mark III.

The above photo comes from the Aperture Academy blog and shows a Canon camera body attached to the new 600mm lens.  The person using the camera and lenses is claimed to be a Canon employee who is testing new equipment.

The camera is clearly a 5D/7D-sized body with a battery grip attached.  There is no pop-up flash and the battery grip offers a joystick controller.  Additionally, the display appears to be a 16:9 format akin to the more recent Canon HDSLRs. Also, note the gaff tape at the bottom of the LCD to cover the Canon log0.  I know its a pretty common thing when traveling or working in public; however, I always tend to look a little closer when logos are covered up with gaff tape.

The body actually looks a lot more like the 7D than the 5D Mark II.  That said, button layouts and general ergonomics have evolved on Canon DSLRs since the 5D Mark II was released roughly 3.5 years ago.