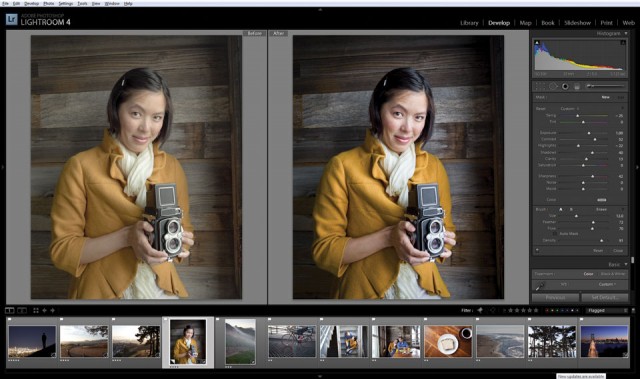 Adobe should be releasing Lightroom 5 as a free beta any day now based on the early release of an article on TechCrunch (which was quickly taken down).

I expect to see the announcement later this week at the Photoshop World opening keynote, which takes place on Wednesday, April 17, at 9AM ET. Adobe is well-known for dropping big news at Photoshop World openers, and it looks like this one got a bit ahead of them.

Some key features that can be gleaned from the preview article posted by TechCrunch include a big change to the spot removal tool. In LR5, you will be able to use custom shapes instead of just a circle. Additionally, the underlying algorithm has been revamped to make it better at removing large sections of an image. Hopefully, that means there is some smart content-aware business going on inside of it.

Another cool feature will allow you to edit image previews when the original files are not attached. This makes complete sense because all of the edits are contained in a sidecar file anyway. This will make it great for editing images on your laptop on a plane without the need to have your external drive attached with the original images.

Lightroom 5 beta should be available to download from Adobe Labs on Wednesday after Photoshop World’s keynote. (Again, that’s my guess and wasn’t revealed in the article on TechCrunch.) It will require Windows 7 or 8, or Lion/Mountain Lion on Mac and supports Retina display resolutions.