Lightroom 6 is turning out to be one of the leakiest products Adobe has released in a while. Now, an eagle-eyed reader has spotted the product over on Best Buy’s site with a price of $149.99 for the full version and $79.99 for the Student and Teacher Edition. Both of these prices were expected, as that has been the default pricing scheme for Lightroom version for several years now. 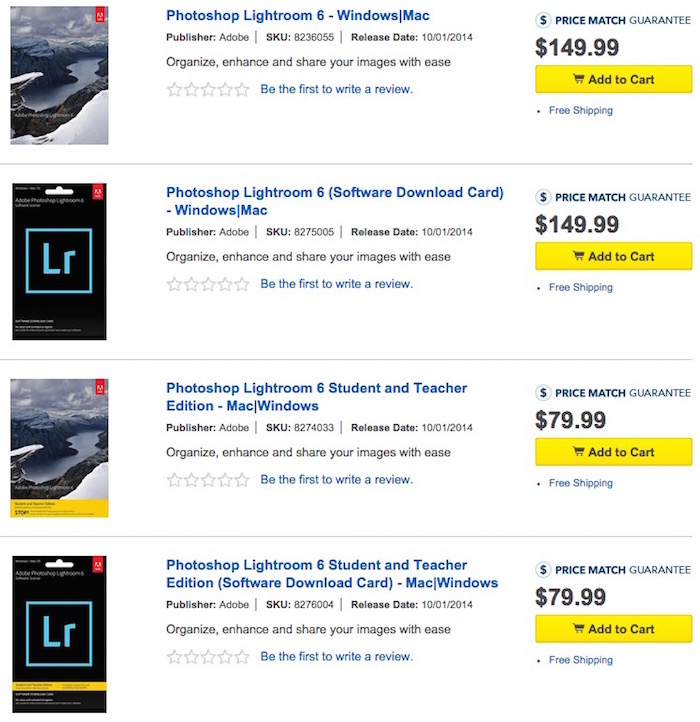 Additionally, we now have a look at the hardware and operating system specifications.

We previously heard about the 64-bit OS requirement from Adobe. Presumably, it will also support OS X 10.10 Yosemite and Windows 10 (which hasn’t been fully released as a final version) as well. The most significant impact will be on Mac users who have yet to upgrade from OS X 10.6.8 or older versions that still support older 32-bit applications using Rosetta, which is a dynamic binary translator that enables applications compiled for PowerPC processors to run on Intel processors.

As a result, if you are using some older software on your Mac, it is now time to make a choice to leave it behind or be left out of Lightroom 6’s upgraded features. Of course, it is possible to create a dual boot scenario with OS X 10.6.8 and the current OS X 10.10 on separate or partitioned drives.

Finally, here’s another reminder of some of the big new features we can expect to see in Lightroom 6:

[Thanks for the tip Rich!]