If you’ve not been keeping up with The Story Beyond The Still contest, the final short chapter launched at Sundance earlier this week.  You can see the entire short film above with a total run time that’s a couple ticks under 38 minutes.

Lots more on Vincent Laforet’s site.  Also, there’s a great recap of the work on the final chapter from Ryan Booth, one of the chapter directors, here on his blog.

Canon’s video contest, “The Story Beyond the Still,” which has been cooking along for a year now, will culminate in the debut of the short film created by contestants and Vincent Laforet at the Sundance Film Festival this Sunday.  The complete short film will be available on the Sundance Channel and Vimeo.com on Monday.

Read up on the history of the film and see the chapters individually on Vimeo.com/groups/beyondthestill.

While speaking with a Canon rep at CES last week, I jokingly asked if I could see the new 5D Mark III?

We started talking about how much I’ve enjoyed my 5D Mark II.  And, then, he asked what I would want to see in the 5D Mark II’s successor? END_OF_DOCUMENT_TOKEN_TO_BE_REPLACED

So, if you can’t swing a 5D Mark II, you might consider the original 5D at a substantial discount.  Personally, I’m drooling over the kit’s price point right now.

While we’ve seen signs of a Canon 5D Mark II for a while now, Amazon may have given us some insight to the availability of the 5D Mark II.  The Canon EOS 5D Mark II Digital Field Guide by Charlotte K. Lowrie is currently listed on Amazon and is available for pre-order with November 2008 availability.

The product details indicate that it has an ISBN of 0470409509.  Further confirmation can be found on the publisher’s website, Wiley.com, which indicates the book contains 272 pages and over 200 photos from Lowrie.  Of course, the Canon 5D Mark II doesn’t appear on Amazon, so it looks like just a few more bread crumbs for now; however, one has to wander whether Ms. Lowrie has gotten her hands on the new Canon camera to have her new book ready in time for the camera’s release.  To stay on top of the latest rumors, releases and news, bookmark Photography Bay’s Canon 5D Mark II page or subscribe to the RSS Feed. 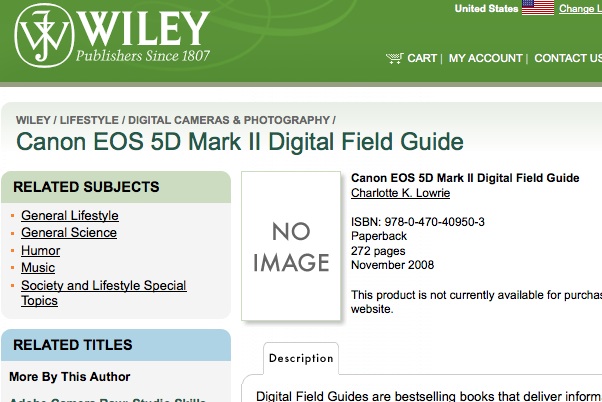 This screenshot has popped up on web, which shows the Canon EOS 5D Mark II on the German version of Canon’s website.  The story goes that the camera appeared on the page for a little while and was then taken down.  There has been a number of debates in various forums regarding the authenticity of this screenshot.  I’m inclined to think that there may have been some Photoshopping done on it as well. Below, I’ve zoomed in and cut out the portion which references the 5D Mark II.

If you have any thoughts or insights on this screen capture, feel free to fire away in the comments below.

If you’d like to know more about rumors and speculations of the 5D Mk II, you can read up on it via Photography Bay’s Canon EOS 5D Mark II Rumor page.

A DPR forum poster dropped in a tidbit of info that he got while shopping for a Canon 5D:

Well, I was a bit sceptical about all the 5d MKII rumours. I stepped into my local camera shop as I was about to buy the current 5D when the salesman said I should rather wait until the 24th of April as the worldwide launch of the new 5D is happening then. (via)

As some astute forum members pointed out, this may be a situation where the salesman is just reading rumors online and pumping them up a bit.  See this previous rumor on an April 22nd announcement.

Regardless of the propriety of this recent rumor, stay tuned to the Canon 5D Mark II Rumors page for the latest updates.

The renewed interest in the Canon 5D Mark II is evidenced by the flurry of forum and blog posts across the internet in the past 24 or so hours. To add more fuel to the fire, the poster who leaked yesterday’s 5D Mark II specs is at it again, with further detail, as well as rumors of a new Canon flagship camera due this fall. END_OF_DOCUMENT_TOKEN_TO_BE_REPLACED

The rumors are heating up again for the Canon 5D Mark II. The latest purported leaks on the spec sheet are as follows: END_OF_DOCUMENT_TOKEN_TO_BE_REPLACED